Big Game Hunting: Could the C's be loading up to go after Marc Gasol? 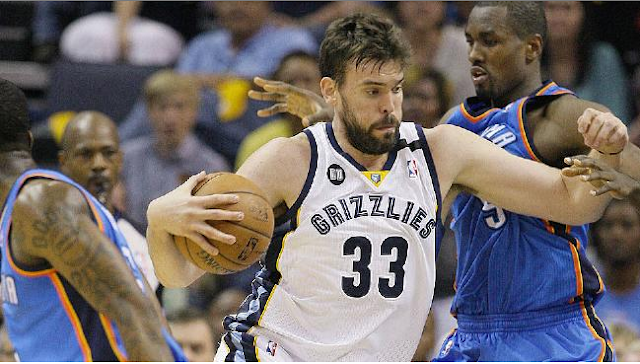 While the Celtics are forecasted to be at the bottom of the NBA barrel this season, Danny Ainge and the front office team for the Boston Celtics are doing all that they can to quicken the rebuilding process and put together another eastern conference powerhouse.

According to Sporting News reporter Sean Devaney, who theorized on a recent Celtics Beat podcast, Ainge’s plans include keeping All-Star guard Rajon Rondo in a green jersey and hopefully adding some firepower from the western conference.

I think a lot of that is going to depend on how he plays, and a lot of that depends on whether they can get another max guy in here to play with Rondo. I think that’s really how it’s going to play out, the Celtics are going to try to use all the assets they have over the course of this year to add another big-time piece. That’s obviously something they would have liked to have done this year with Kevin Love, but that just never really got close. It never got beyond the talking stage with the Timberwolves and the Celtics just didn’t have anything that the Timberwolves really wanted. But that’s the kind of deal that they would like to make in the next few months, where you have a star who’s unhappy and a team looking to unload a big-time player in return for some long-term assets. That’s the kind of thing that the Celtics are looking for.

Regardless of what happens with Rondo, the goal has to be to sign the biggest free agent possible. Adding the younger of the Gasol brothers would be a step in the right direction.

Gasol, who will be 30 entering the 2015 NBA off season, has been tremendous for the Memphis Grizzlies in the much tougher western conference. Gasol is due to make $15M this season and after an injury riddled 2013-14 season, will be looking to rebound in 2014-15 and get a nice little payday for what could be his last big payday.

Paired with Rondo, a constantly improving Jared Sullinger, a locked up Avery Bradley, and lots of youth with upside, Boston may not look too bad at all to Gasol.

Is this the hope we’re going to hang our hat on this season? Would Gasol be enough to keep Rondo on in Boston? Would the Rondo/Gasol/Sullinger/Bradley/Smart roster be enough to attract another top-tier free agent?

This is an easy rabbit-hole to go down. I don’t don’t want to get too far ahead of myself. No good ever comes from that.