What the Hell Happened to...Tom Barker? 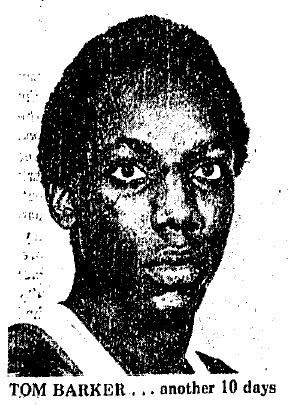 “I like him. For a guy who hasn’t even had the time to learn the plays, he’s done all right. He can shoot a little and rebound and moves well.  He’s not afraid to shoot and he has better hands and is smarter than Earl Williams.  In the last few games he’s contributed quite a bit.”   - Dave Cowens on Tom Barker


Back during the late 70s the Celtics were a team in transition.  Before the Bird era began but not quite before the Cowens' era ended, there was a certain 6'11 center who played for Boston who you may or may not remember.  He was there for a short period, so short, where you may have forgotten about him over the years.  We at Celticslife will never forget Tom Barker.

Tom is the pride of Weslaco High School in Weslaco, Texas.  His sister Rochelle was the fastest girl in the 100-yard dash in the late 60s and early 70s and still holds the records as the fastest ever girl from deep South Texas.

As for Tom, he took the most circuitous of routes in college.  He began at the University of Minnesota for his freshman year, but left claiming he "didn't care for (head coach) Bill Mussellman" and his crew of gunners.  He then transferred to a junior college, the University of Southern Idaho.  They had been known around that time for producing some pretty big time players including Ricky Sobers, Ron Behagen and Tim Bassett.

After winning the national junior college player of the year at Southern Idaho where he averaged 22 ppg and 10 rpg, Tom signed a letter of intent with Norm Sloan and the defending National Champion NC State Wolfpack in May of 1974.  But then something happened.  During the first weekend of August in 1974, Barker enrolled at the University of Hawaii.  Sloan for one was still optimistic:

I don't think this decision Tommy made over the weekend was his decision.  The final registration date is the important thing for us.


But Tom never went to NC State.  He decided to sign on with coach Bruce O'Neil and the University of Hawaii.  The loss for NC State was a huge blow as they had just lost center Tom Burleson to graduation, the role Barker was supposed to fill.  Meanwhile Tom went on to be a star at Hawaii before being drafted by the Hawks in the 4th round of the 1976 draft [TB tangent 1: for any of you thinking the 4th round is nothing special remember that Tom was the 53rd overall pick, which means he easily would've been a second round pick in today's overexpanded NBA].

[TB tangent 2:  Furthermore the University of Hawaii needs to open their eyes and welcome Tom into their Hall of  Fame (Circle of Honor).  Only 7 Rainbows made the NBA, EVER.  Don't make this like Bobby Wilson and Wichita State all over again because Tom was a transfer too.  And if Anthony Carter is included in the UH Sports Circle of Honor, so should Tom Barker.]

After going through basketball extremes in college, it didn't get any easier for him in the NBA.  He played 59 games for the Hawks averaging 8 ppg and grabbing 401 rebounds.  But the Hawks coach at the time, Hubie Brown, preferred someone with more muscle to play the pivot whereas Barker was more willowy and didn't fit the role.  Hence he'd be waived after one season with the Hawks only to find himself in the Eastern League playing for the Jersey Shore Bullets, which was the NBA Minor League at the time. 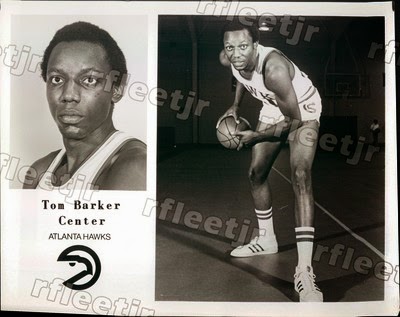 Tom tore up the Eastern League and was averaging an astounding 25.5 ppg and 19.8 rpg average.  He first got called up by the Rockets where he played 5 games but wound up being cut and was available when the Celtics traded Dennis Awtrey away and Rick Robey got injured.  As for Tom, he considered himself lucky to that point and was rather humbled by the Eastern League experience:

I admit it.  I was spoiled.  I'd played at Southern Idaho, a school that had produced Tim Bassett, Ron Behagen and Ricky Sobers.  Then I went to Hawaii where everything was done for you.  I got used to things, and I wasn't quite ready for the pro game, where they expect you to be ready every night.


Playing in the Eastern League can bring you down in a hurry.  You don't have any frills in that league.  You just showed up each night and played.  I found out a few things about myself and I know it helped me mature a lot.  I just hope I can continue to improve in the next 10 days here.


However his time in Boston would be brief.  Two 10-day contracts, 12 games and 53 points scored before being moved in the trade for Bob McAdoo.  It came down to Barker or Curtis Rowe, as Knicks GM at the time Sonny Werblin explained:

The deal called for us to get Tom Barker or Curtis Rowe at (Celtics' owner) John Y. Brown's option.  He now tells me he won't give up Rowe so we'll take Barker.

And that was that for his time in Boston. But not before player-coach Dave Cowens, he of the complimentary quote above, was peeved:

Cowens liked Barker as a prospect.  He also liked the idea that the Harlingen, Texas youngster could fill in for him at center whenever he felt he needed a rest.  Cowens liked Barker enough to give him his personal assurance he'd stay with the Celtics the rest of the season.  But the club owner outranks the coach so Barker wound up going to the Knicks and Cowens didn't like it one bit.

Interesting in that article how it explains the Celtics took both Rowe and Barker on their trip to San Antonio, hoping that Frankie Sanders would be the guy that would go to the Knicks.  It didn't work out that way. 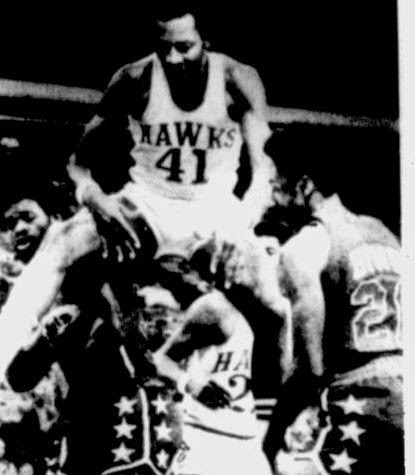 One other absolutely fascinating story of when Tom was on the Knicks.  During the first portion of his 22 game stint as a Knick, Tom's jersey did not have a number on it.  It was a generic jersey so before each game, Knicks' team trainer Mike Saunders wrote a big # "6" on Tom's jersey with a piece of chalk.  Imagine that?!

After 22 games with the Knicks, Barker left to play in Holland.  In 1981 his rights were traded to the Portland Trailblazers, though he never reported there.

For the second time in the past month (after Garfield Smith) we were "aboutthisclose" to making this a full interview with Tommy.  We received his phone number and email address and even received a text message back from him.  But after numerous attempts it seems Tom wasn't too interested in speaking.  We can only respect his privacy.  But unlike the case of Garfield where we couldn't tell you what he's been up to, we can for Tommy!  Currently he's been living in New York state (the Syracuse area) and has been a truck driver for quite some time now.  In fact this year he was slated to be inducted into the Rio Grande Valley Hall of Fame but had switched jobs recently and couldn't get the vacation time off he needed to make the trip down there.   The folks there are hopeful he can make it down in 2015 to receive his honor.

Celticslife thanks Tom for his time in Boston.  If his current boss is reading this, we demand you give Tommy the necessary time off from work to allow him to head back home to accept his well-deserved spot in their Hall of Fame!

A special thanks to Charlie Vaughan at the Rio Grande Hall of Fame, Tom's sister Rochelle Barker and Isidoro Nieto, former principal of Weslaco High School, for helping fill in some of the blanks on Tom's career.