What the Hell Happened to...Benny Clyde? 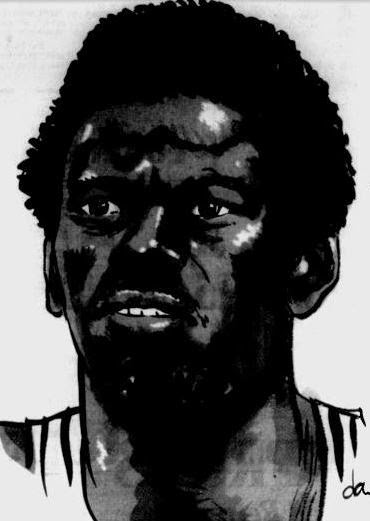 "I knew I had to change.  Like, this wasn't gettin it.  How do you change?  You've just got to stop and think man, that's the only way.  I decided I was gonna have to be cooler.  Now I'm real cool." - Benny Clyde


In October of 1974, Bob Ryan called him "the most physically gifted forward the Celtics drafted since John Havlicek."  He followed that up with "he's an authentic funky, soul brother leaper, a pretty good shooter and an absolute sprinter."  Former Celtic Skip Young called him "1 of the top 2 players to come out of Florida State."  If you followed the Celtics closely in the 1970s, you absolutely remember Benny Clyde.

Benny was first a standout for St Petersburg High School in Florida.  In May of 1969 as a junior, he had lead the team to an 18-6 record.  However before he even got to enjoy his senior year, he was expelled by principal Fred "Doc" Geneva for having extorted money from another student after threatening him with force."  Benny maintained his innocence in one of the rare times he spoke of the incident:

I didn't do it.  I don't ever talk about it but I'll tell you what really happened.  I bumped into this boy in the hall.  He was a senior and I was a junior.  I said I was sorry but he wouldn't accept my apology.  I said 'All right, what are you gonna do about it?' We fought and I broke his nose.  He went to see the principal and told him I'd been trying to get money off him, and he got 4 or 5 of his buddies to say the same thing.  But it never happened.  I made a mistake by getting into the fight.  I know that.  But I didn't do what they said I did.


Benny had a lot of help from those around him growing up to get through the tumultuous times.  His mother, Totsie Bell Clyde worked everyday doing laundry to support her 8 children after their father left.  Jamie King was the basketball coach at St Petersburg and was more of a father figure to Benny than anyone else.  Joe Eldson was an assistant in the Pinellas County School board and helped him during his darkest time, the expulsion.

Although readmitted to Gibbs High School for his Senior Year, he was not allowed to play basketball (which will definitely preclude him from ever getting inducted into their Hall of Fame).  It was really tough on Benny not being able to play that year and he decided he was going to have to change.  He was going to have to become "cooler":

I knew I had to change.  Like, this wasn't gettin it.  How do you change?  You've just got to stop and think man, that's the only way.  I decided I was gonna have to be cooler.  Now I'm real cool.


[TB tangent: at no time did just "becoming cooler" ever work for Steve Scheffler.]

And speaking of folks that helped him there was his 9th grade civics teacher, Rubye Wysinger.  She pushed Benny to get to college and became his personal counselor when he was back at Gibbs.  In fact upon giving him a ride home once after playing, she was astonished to see 110 letters from colleges for him.

The only one Benny had begun filling out was for Ellsworth.  I took it home and finished filling it out and expressed-mailed it for him.  The coach wrote back and said it was all set.  I had asked him why Ellsworth and he said he liked it was a small school and thought he could build a foundation.

And build a foundation he did.  Ellsworth Junior College was in Iowa, and there Benny became one of the best junior college players of all time.  He won the National Junior title his freshmen year and earned All American status both years.  He was all set to attend Arizona on a scholarship when his mother fell ill.  So he felt it better to return home to Florida State, because of its close proximity. 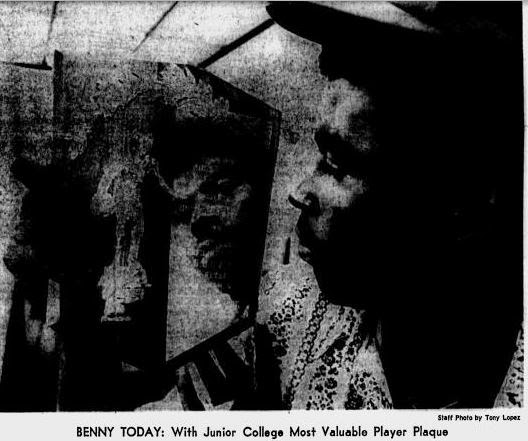 FSU's head coach Hugh Durham knew he was "taking a chance" at offering Clyde the scholarship, but did nevertheless.  Sports Illustrated described Benny this way in its' 1973 article 'Clyde the Glide and the Slide:'

"Admittedly a superior individual basketball talent, the youngster was struggling to forget a childhood that included some brushes with the law in his hometown of St. Petersburg, Fla. He was a product of poverty, with a reputation as a bitter, moody, withdrawn, suspicious individual. Those who know him claim that he does not trust anyone, specifically whites. Some people resent his detached manner. Indeed, one of Durham's frustrations is that Clyde seldom smiles. Perhaps that is because life has not seemed all that funny to Clyde, whose face is pocked with the scars of childhood fights."


Benny would be suspended multiple times at FSU for skipping classes and punching an opponent during a game.  Class was also never on his mind:

I wasn't ready for school.  And I just didn't like going to class.  The people there didn't understand me .  I didn't talk much and they didn't know me.  They didn't dig where I was coming from and I used to get into a lot of fights.


So upon dropping out of Florida State he tried to make the Kentucky Colonels.  But Wendell Lander and Ron Thomas had no-cut contracts which meant Benny was the last cut.  The Celtics meanwhile picked him in the 5th round of the 1974 draft.  Ben had completely vanished from the public eye, playing mostly on playgrounds in Florida.  But the Celtics were a stubborn group back then.  Despite warnings they remember they had also been told a certain center from Florida State was undersized and couldn't make it and he turned out more than fine in Dave Cowens.  Said Celtics' assistant coach John Killilea:

The funny thing is we checked them (rumors) out.  And the only rumor that was true was that Benny didn't like to go to class.  But come to think of it, neither did I. 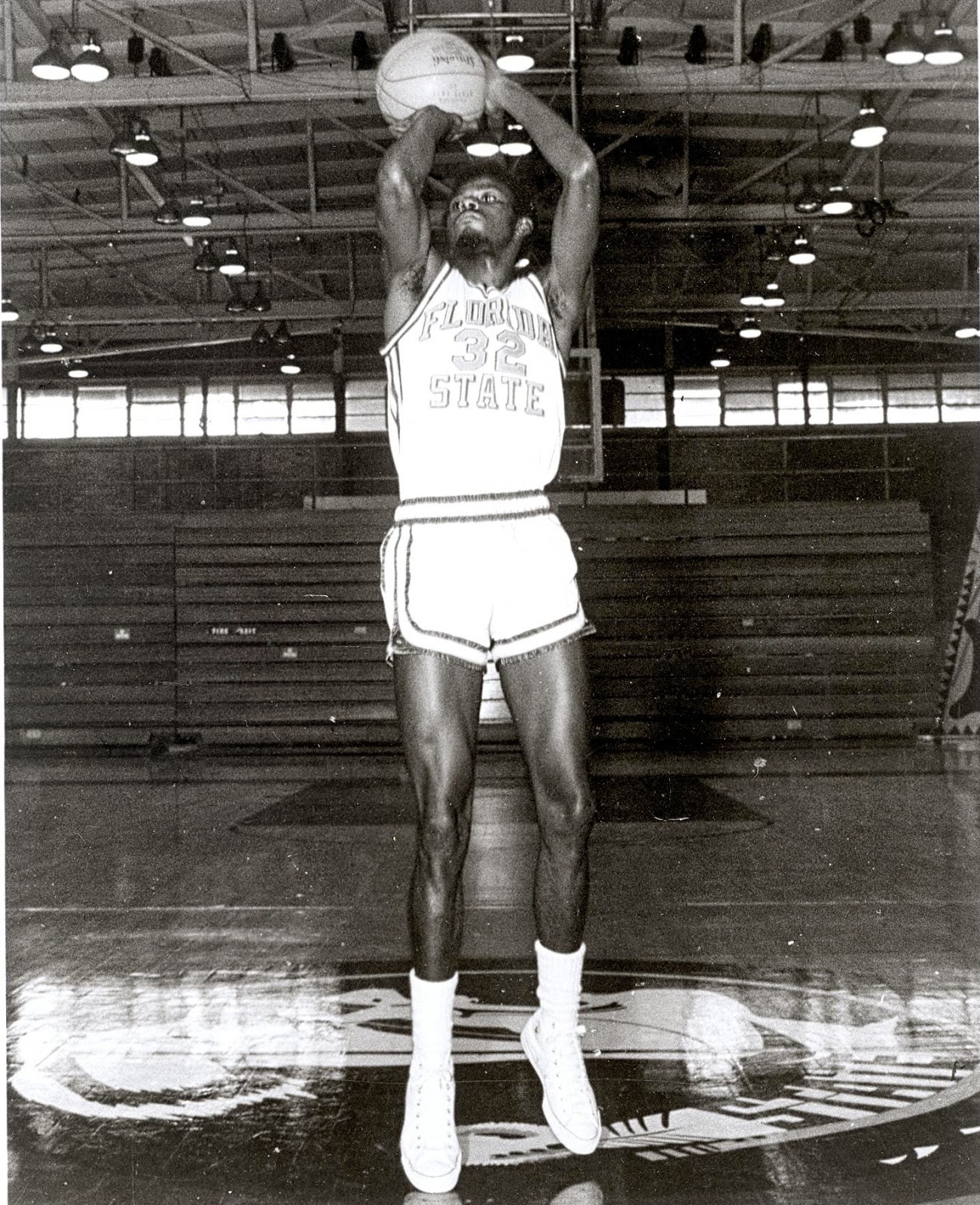 The Celtics explored the past and found he left FSU on relatively good terms.  Coach Tom Heinsohn for one was very excited:


He's got a lot of raw talent.  And if he's cut, he'll be one of the last ones.  He's super quick, yet he has the power of a forward.  He can leap.  He was the talk of our camp the first few days but now he's hurting (pulled muscle) and it's tough for him.  He didn't play at all last year and that makes it hard on him.  But he's got an excellent chance.


Larry Whiteside of the Boston Globe had this to say on him at the time:

Move over Walt Frazier, there's a new Clyde in town.  Well maybe Ben (Glide) Clyde hasn't made it to the NBA yet.  But he's coming.  Standing 6'7 and weighing 198, he was born to play basketball. Somehow he glides up the floor with seemingly little effort as possible.  He is quick, yet smooth.


As for Benny?  He certainly talked the talk:

Basketball is really all I know.  And I'm in it for the money.  I never did want to go to school, I don't even like going to school.  But my mother thought I should. 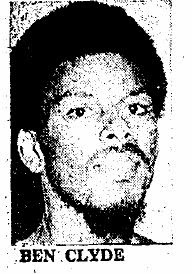 Well Benny made the Celtics for that 74-75 season.  And began getting some playing time.  But 10 minutes a game wasn't what he wanted.  And when Don Nelson returned from an injury and Clyde began only getting garbage time, he was peeved.

"My job is to play basketball.  I know I can play ball.  I know I'm better than most of the players in this league.  I also feel I have more talent than any player in the league.  So I refused to go into the game.  You don't do that with the Boston Celtics."


He bumped heads with head coach Tom Heinsohn and yes, even refused to enter into a game one time.  That forced the Celtic' hand as insubordination would not be tolerated.  The Celtics waived Benny after 23 games in March of 1975.

Some had speculated at the time the Celtics were grooming him to eventually replace Havlicek; he was that good.  Remember back then when there was less teams for the talent level to be dispersed amongst, the Celtics would often take guys like Sam Jones or Tom Sanders, and work them in slowly before they went on to become real stars.

Talent was never a question for Benny.  Commitment was.  Heinsohn expounded at the time:

"He's probably right (in regards to having more talent than anyone in the league.)  Benny thought the whole world was waiting at his doorstep for his talents.  He hasn't made the realization there's more to the game than just talent.  Talent is only as good as you use it to blend with the other people on the team.  I don't think he's a troublemaker.  He just hasn't gotten himself together yet.  It's not that he's malicious, he's just suspicious of people.  I would put him into a game late in the game and he thought it was all my fault." 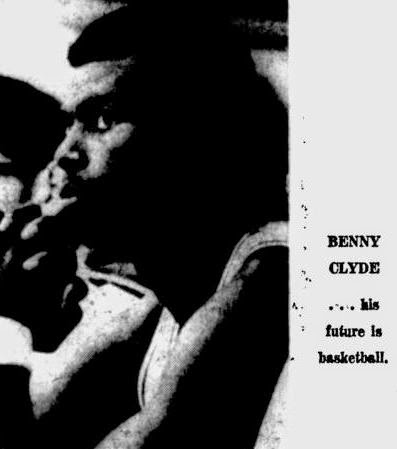 That next summer the Celtics actually looked to bring Benny back, offering him a contract that would even pay him more.  He turned it down.  The Knicks were apparently interested in him during the summer of 76 as well and invited him to their camp.  The last known Clyde reference to his NBA playing days came from a July 1977 article by John Powers of the Boston Globe that said Clyde was looking to make the Milwaukee Bucks.

Unfortunately it seemed Benny had a world of talent but not a lot of trust which may have prevented him from becoming a truly spectacular NBA player.  From all accounts he could handle the ball, see the floor, get to the basket, shoot, score and rebound even better than expected than for someone his size.  He sounds like a do-it-all type forward, someone in the mold of Billy Owens or Grant Hill, though probably a better scorer and not as good a passer.

But so what if Benny Clyde never reached his max potential on the basketball court?  He wouldn't be the first and won't be the last.  What better way to wrap-up this entire story than with a feel-good update on what Benny is up to today.  No his health hasn't been very good recently.  Just like Ron Watts who has been spending time at the Wasserman House Rehab Center, Benny was first in a nursing home in Georgia.  He suffered a large stroke which left him paralyzed on the entire right side of his body and to had to have his right leg amputated above the knee.  However resilient, he has now been moved to Gulfport Rehabilitation Center in South Pasadena, Florida, a mere stones' throw from his hometown of St. Petersburg.  Thrilled to be back in the area, he even designed this piece of artwork titled "Benny's Team"  for the painting competition affiliated with his nursing home: 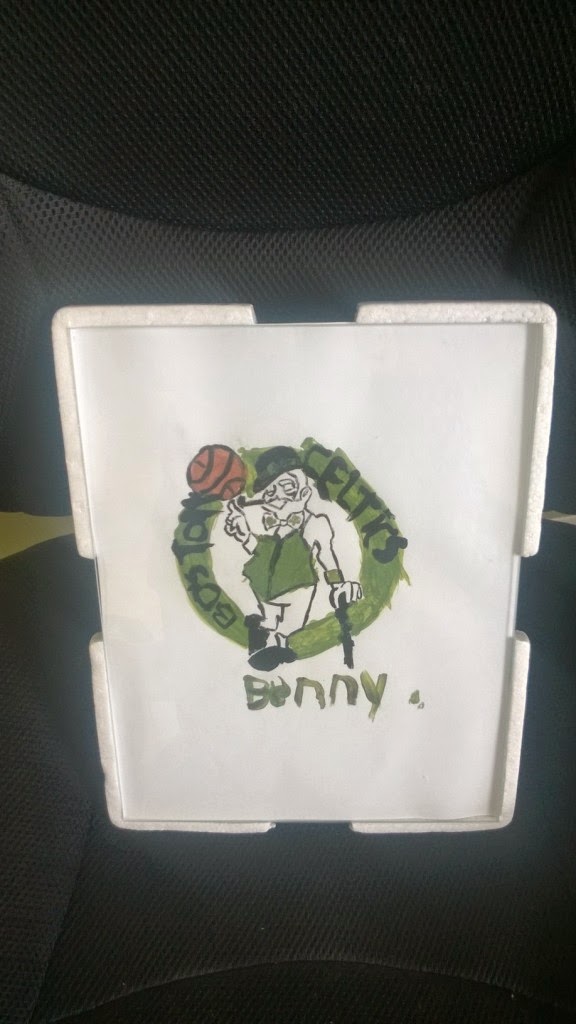 How cool is that?  But it should be expected from Benny since he was always about "cool."  And it obviously indicates just how meaningful his time with the Celtics was for him.  It's heartwarming to see how someone in his condition would have the fortitude to paint that (and the Celtics' logo isn't an easy thing to depict.)  He certainly would have had my vote in their art contest competition!

This fall, Benny will be participating in the Senior Olympics at Gulfport Rehab Center.  And in October, word is that he's slated to be inducted into Florida State's Hall of Fame.  Very cool indeed.

Celticslife wishes Benny the best in his rehabilitation and thanks him for his time with the Celtics.