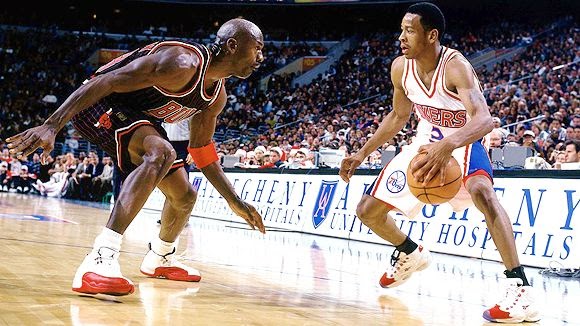 Kevin Durant recently stated on his Instagram that pound for pound Allen Iverson is the greatest player of all time:

For starters, I have never liked these pound for pound comparisons. It's like the kid on the playground who states he would be in the NBA if he were only four inches taller.

Having said that, Iverson was a warrior and I'm a fan but he's the type of player that you will never win a championship with as the focal point of the offense.

In fact, when did any team with a score first point guard win a championship?

This is why I would definitely trade Rondo for Westbrook if I was OKC and I would have pulled the trigger on the Kevin Love for Klay Thompson trade if I were the Warriors.

Steph Curry's a great player but it is my feeling that you'll never win a title with him at the point. (I would have traded Klay and moved Curry to the two spot and started Livingston).

The closest thing any team has had to a combo point guard winning an NBA championship is the 2004 Pistons with the recently retired Chauncey Billups and he was definitely more of a traditional point.

Furthermore, for starters, if we are going to go just the pound for pound argument I would without a doubt take Billups over A.I.

If we were to make the argument purely by height, I believe Isiah Thomas is the greatest of all time for any player 6'1 and under.

The window of opportunity for the Thunder's championship hopes is getting smaller by the year and subconsciously maybe Durant is thinking he's a player that doesn't want to be defined by championships like Iverson.