What the Hell Happened to...Rick Brunson? 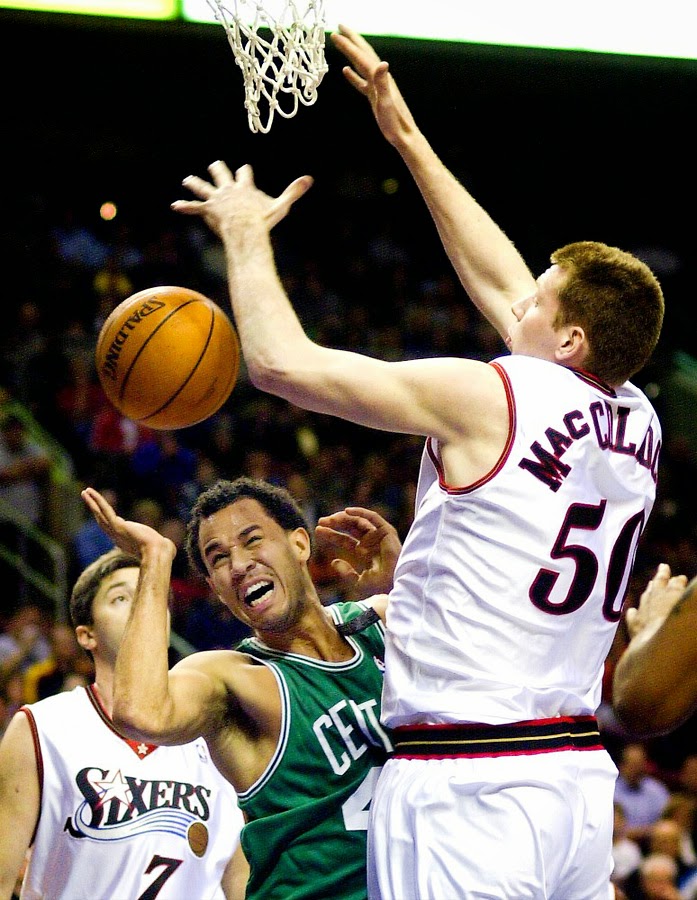 If you watched college basketball in the 1990s, you remember him as being the 3rd best player at Temple (behind Eddie Jones and Aaron McKie).  If you didn't know better, you may not have guessed he stuck around as quite as long as he did or that he had a quick stint with the Celtics.  In this go-round for What the Hell Happened To, we remember the "Brunson Burner," Rick Brunson.

Brunson attended Salem HS in Salem, MA where he was named a McDonalds All American before heading onto Temple, where he'd graduate from in 1995.  A very strong college player he was not drafted by any NBA team that year and started out playing for the Adelaide 36ers in Australia in 1995-96 for whom he was their season MVP. After a stop in the CBA in 1997, Rick's NBA basketball odyssey would begin.  We've seen these time and time again in WTHHT: a guy never having a solid home and being more like a hired gun.  Here's a snapshot of Rick's career: 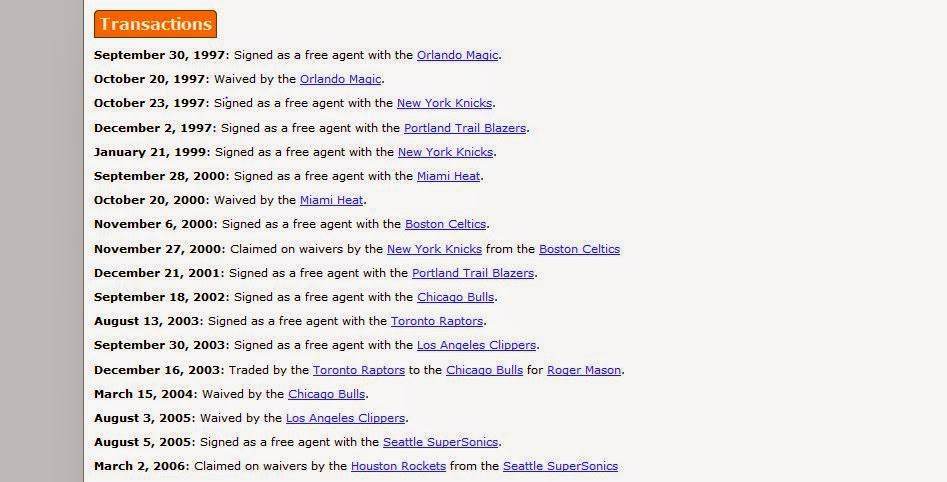 The part we're most concerned with is November 6, 2000, when he signed with the Celtics.  He'd appear in 7 games for the Celtics (including the picture above vs Philly) actually averaging 20 mpg for the Evil Emperor.  My guess is someone had gotten injured at the time and that's why Boston brought him on board.  Unfortunately it was like that for most of Rick's career.  However through his perseverance he was able to make a 9 year NBA career.  In concluding his total game breakdown reads like this:
Without looking it up I woud've guessed his most career games was with the Knicks but interestingly enough, of the additional 16 career playoff games Rick appeared in throughout his career, 14 of those were with NY, including 9 during their 1999 run to the Finals.


If you never saw Rick Brunson play, he was the quintessential NBA backup point guard, in every sense of the word, cut from the same cloth as Doug Overton.  If he landed on the right team at the right time, he may have stuck around in one place a bit longer.  As for the nickname, definitely the first time I heard "Brunson Burner" mentioned was by Dick Vitale during a Temple game on ESPN.  Eddie Jones was no doubt a "high-riser." 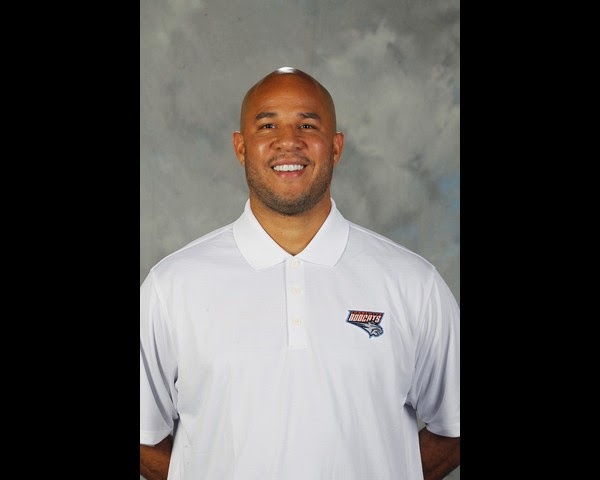 Upon retiring Rick has kept himself very busy in the coaching world.  From January to April 2007, Brunson he worked as an assistant coach with the Denver Nuggets, focusing on player development. From 2007 to 2009, he was with the University of Virginia as the Cavaliers' director of basketball operations. In May 2009, Brunson was hired as assistant coach for the Hartford Hawks men's basketball team.  Like fellow WTHHT alums Adrian Griffin and Ed Pinckney, Rick got to be assistant coach of the Bulls in 2010-11. 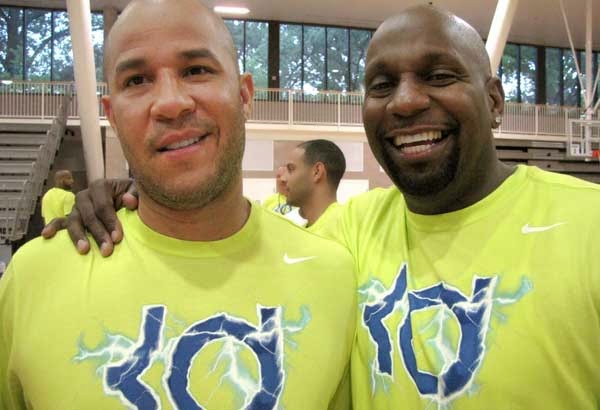 During the 2013 season, Brunson served as an assistant coach to Mike Dunlap on the Charlotte Bobcats' staff.


It's definitely also worth nothing that there's a hilarious collection of photoshopped Rick Brunson pictures online that came from  this website.  The Rick Brunson insider butt slap?  A Rick Brunson banner with snow?    A Rick Brunson "Operation" picture?  Rick Brunson with a caveman beard?  How/why did someone spend the time creating this?  Is this not the funniest site of all time?  Want to BRUNSON your computer with screen savers? Check it out: 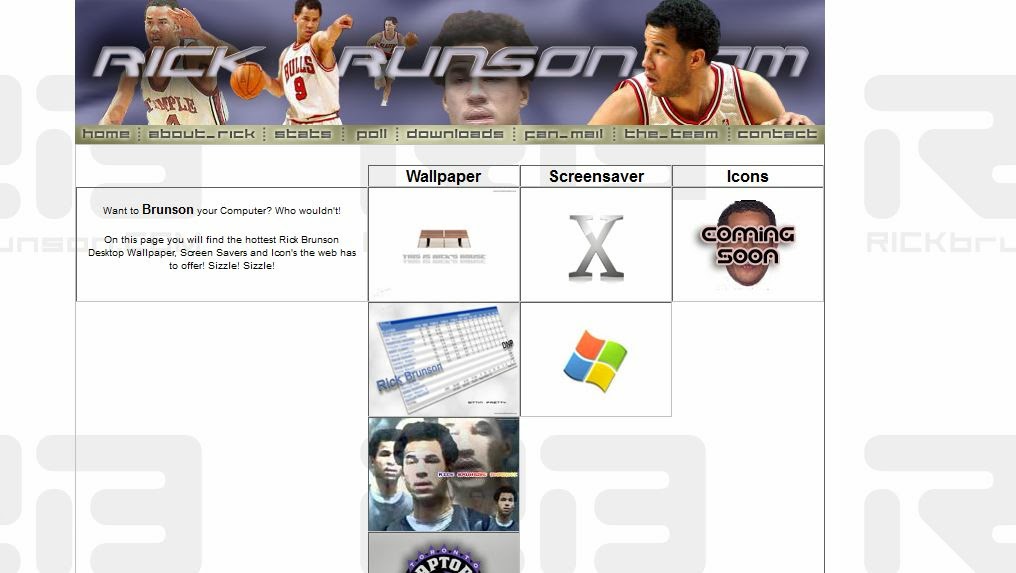 Similar to Overton once again, Rick has a son Jalen, who is hoping to have a promising basketball career.  You can see him here alongside Rick:


Cool stuff. But that's not all in this article that keeps on going and going! Last month Brunson was arrested for trying to sexually assault his masseuse. But that may not be the craziest part of the story.  Apparently the masseuse had told Brunson to stay away and not come back but he did....under the name 'Patrick Ewing.'  Does it get more hilarious than that?  She tells him to stay away but he tricks her into showing up by using the name Patrick Ewing.  Maybe Ewing should begin doing that to land head-coaching job interviews.  Call up and say "hey this is Jerry Sloan and I'm interested in the job."  And then just show up for the interview and force the team to consider him.

Hopefully Rick enjoyed his time with the Celtics.  Maybe one day, Jalen and Doug's sign Miles will be battling it out for a point guard spot on the Celtics.