The next big three? How the Celtics could acquire both Carmelo Anthony and Kevin Love 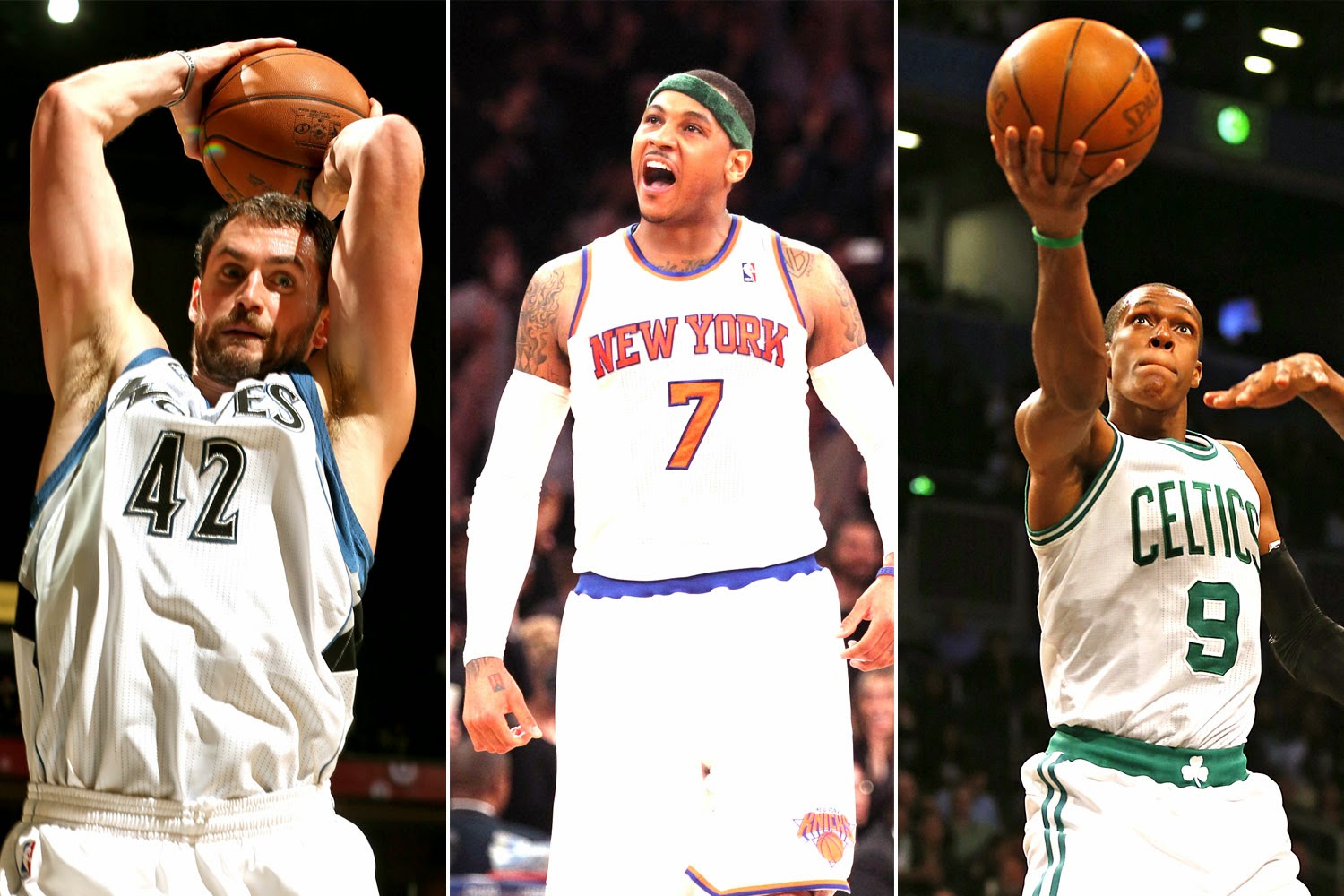 The NBA is all about stars. And usually, it takes three such stars to win. LeBron-Wade-Bosh, Pierce-Garnett-Allen, Duncan-Parker-Ginobili, Bird-McHale-Parrish, Magic-Kareem-Worthy. Sometimes, two great players can make it happen if one of them is transcendent (Jordan/Pippen being the best example), but usually it takes three Hall of Fame talents coming together for a team to win it all.

And with all of the Kevin Love rumors, that begs the question: Is it possible for the Celtics to add both Love, and another star?

And more specifically, a lot of Celtics' fans are infatuated with one guy in particular..

I can't even tell you how many times I've seen this talked about on twitter and in the comment section. Can the Celtics bring both Love and Carmelo to Boston this summer? And if so..how?

Well, I've figured out a path to getting it done. It won't be easy, and it will basically cost the Cs everything they have -- but it's at least within the realm of possibility. It will take a series of moves, let's break them down one by one.

First let's discuss the Celtics current salary situation, here are all of their guys under contract for 2014-15, including non-guaranteed deals.

I included the cap holds for the Celtics two first round picks, because that is included when a team's cap space is computed.

I also included the non-guaranteed deals, because they will all be used in deals to make the financial aspect work.

So what is move #1? Well, bringing Kevin Love to Boston of course. Here's my deal.

Why Boston does this deal:

Well, they get Love and his monster 26/12/4 stat line every night. Love plays with "Rondo-lite" in Minnesota (Ricky Rubio) and we've seen the kind of offensive impact he can make with a pass first point guard. Rondo is a better scorer/shooter than Rubio (Rubio has the worst shooting percentage in NBA history), but there games are similar enough where you at least know Love will be comfortable with Rondo getting him the ball.

Why Minnesota does this deal:

The Wolves get the #6 pick in a very strong draft, plus a good young player and two additional firsts, including the 2016 Nets pick which could be in the lottery if the Nets aging roster does what we think it will. Who is beating this deal? The Lakers only have the #7 pick to offer; the Suns have a host of picks, but nothing comparable to the #6 pick this year; Houston has Chandler Parsons, but only late firsts in terms of picks; and the Warriors have Klay Thompson, but absolutely no first rounders to dangle. This is probably a better deal than what the Cs gave up for Kevin Garnett back in 2007, and provides a really nice push of the reset button for Minny.

Ok, so now the Celtics have Rondo and Love, but how do they bring Melo in? Well, they need to shed a whole bunch of salary, and to do so, they need to take a page from the Warriors last summer -- dump some of their contracts to a team well below the cap. To do so, they will need to offer up assets to make it work. Here's my best guess at something that could get done.

Why Boston does this deal:

Easy: to shed enough salary to sign Melo (obviously the deal needs to be lined up before the Celtics make this move). To get Philly to take $17 million in salary, the Celtics need to give up some assets, and they do in Olynyk, a 2015 first and a 2015 second (Plus, the Sixers may like Vitor). This deal mirrors last summers Warriors/Jazz deal where Golden State dumped $21 million in salary on the Jazz, and gave up 2014/2016 first rounders in the process. I think that a 2015 first and Olynyk, who proved to be an NBA caliber big man and is under contract for cheap the next three seasons is comparable, if not even better value.

Why Philly does this deal:

There are a few reasons.

1. The Sixers pick up two more assets in exchange for money. As they continue their "total teardown" rebuild..assets are always wanted.

2. Philly is way below the salary floor, and this deal would help them reach it. The NBA instituted a floor that each team must spend to every season in the last CBA, and next year it figures to be around $56 million. At the moment the Sixers have about $27 million in commitments for 2014-15, and even including their draft picks, that number doesn't figure to jump above $35 million. This deal brings them to $52 million..allowing them to come close to the floor, but not approach the cap. And they bring in two more assets in the process.

So let's say this happens, here's an updated Celtics' roster.


Move #3: Decline Pressey's option/deal him for a second round pick

The Celtics still need just a tad bit more cap space, so they'll need to decline Pressey's $816,000 option for 2014-15, or deal him for a second rounder (second round picks do not have cap holds). Also they'll need to give up their rights to Avery Bradley, making him an unrestricted free agent, and removing his cap hold.

So where does this leave us?

With all of their new cap space, the Celtics could give Anthony a max deal (4 years, $95,897,372), with a $22,458,401 salary in 2014-15. Carmelo would have to take a four year deal as opposed to the five years the Knicks could offer, but he'd be making the same yearly salary. So if he's confident he'll still be a max player in four years, he loses no money, and he'll be in a much better situation. Let's say he takes the bait (we've always heard he loves Rondo) -- here's where we stand.

Now we're getting a little crazy, but here me out.

Why the Celtics do this deal:

Kevin Love cannot protect the paint, and this team badly needs a defensive backbone. They give up Wallace (oh no!), and a future first rounder, including the valuable right to swap with the Nets that season. If the Celtics are going all in, this is a no brainer, despite Sanders' off the court issues.

Why the Bucks do this deal:

If the Cavs take Andrew Wiggins or Jabari Parker, the Bucks are going to take Joel Embiid. And that would clearly open up Sanders to be dealt. But even if they take Parker or Wiggins, Milwaukee may be looking to move the problematic Sanders. He's about to get very expensive (4 year, $44 million extension kicks in this year), and for a rebuilding team, that's a high price to pay. Yes, Wallace's deal sucks, but it's also done in two seasons, compared to Sanders running for four more years. Milwaukee also adds a first rounder in three years, which could be a great pick if the Nets crater. Wallace also becomes movable next summer as an expiring contract. It's far from a guarantee that the Bucks jump on this, but if necessary the Celtics could also offer a 2019 first rounder to sweeten the pot.

So the Celtics have four players and the 17th pick. Use that 17th pick on the best shooting guard available (Nik Stauskas, Gary Harris or Zach Lavine).

The Celtics would be just over the cap, but well below the luxury tax, allowing them to use their mid-level exception to bring in bench help. They would also be a major contender that could attract a ton of different guys to play for them (remember the 2007-08 Celtics brought in Posey and House this way).

Now the better question becomes: is it worth it?

I'm tired and just did a lot of math, so I'll leave that up to you. But it would be a really fun team to watch, and if Sanders bounces back to his 2012-13 form and protects the basket, and some quality vets join the team..look out.

The price of Kevin Love: How many draft picks are too many?