Leon Powe part of Red Sox ring ceremony to represent 2008 Celtics, and he was actually the best choice 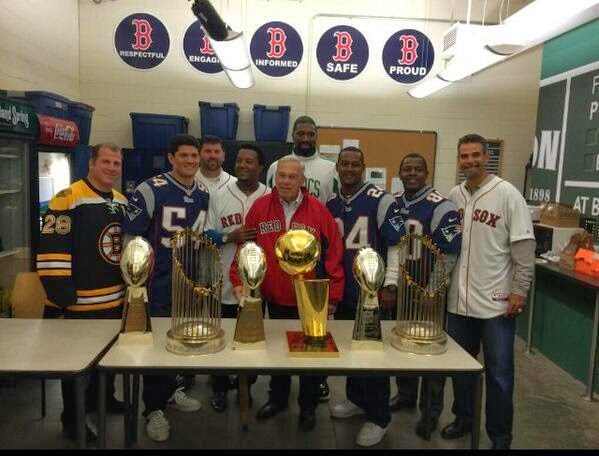 So as Boston is prone to do about once a year, the Red Sox celebrated their 2013 World Series title today, and it was extremely well done. Tributes to the marathon victims and firefighters who died last week, banner and ring ceremonies, montages to commemorate last season, and finally, the first pitch ceremony.

Former Boston Mayor Tom Menino was honored at first pitch, surrounded by each of the championship trophies that New England has won since 2002, when the Patriots got it all started.

There was Ty Law, Tedy Bruschi and Troy Brown representing the Pats, Mike Lowell, Jason Varitek and Pedro for the Sox, Mark Recchi for the Bruins (although without the Stanley Cup, which currently resides in Chicago), and Leon Powe for the 2008 Celtics.

Of course, twitter went ballistic, sarcastically mocking Powe for being there with a bunch of Boston legends. But who would have been a better choice?

Rondo has a game tonight, and god knows he would've taken shit for coming to Fenway a few hours before tip-off, and Ray, Pierce, KG, Perk, Scal, Big Baby, Tony Allen, Sam Cassell, and James Posey are all currently playing or coaching for other teams.

So Powe really wasn't a bad choice as much as he was on the short list of players around to take part. And oh yea, for those who forget, Powe was an absolute beast in Game 2 of the Finals in 2008. 21 points and approximately 17 coast to coast dunks right in the Lakers' face.

So get off Leon's back. Great guy, world champ, and willing to come back from California to take part in a celebration of Boston's awesomeness (not to mention, Powe is not all that different than Recchi. Few seasons in Boston, one ring, solid guy).