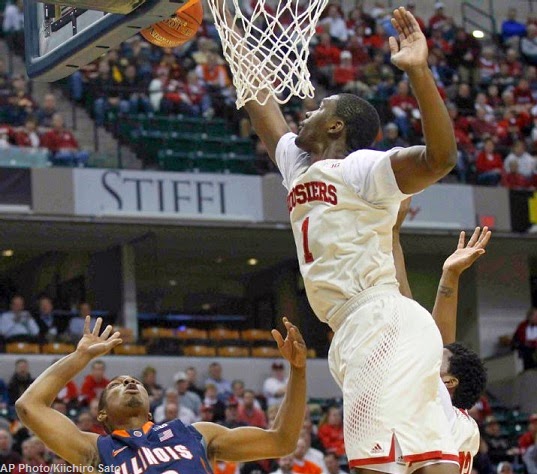 From Gary Parrish of CBS Sports:

Indiana's Noah Vonleh told CBSSports.com on Sunday that he will enter the 2014 NBA Draft.  "It's going to suck leaving college without an NCAA Tournament," Vonleh, a 6-foot-10 freshman, said by phone. "But I have to do what's best for me."

Vonleh averaged 11.3 points and 9.0 rebounds this season for the Hoosiers, who missed the NCAA Tournament for the first time since 2011.  "I've heard the fourth pick to the 12th pick is wide open," Vonleh said. "[I think I'll be selected] anywhere in that range."


Ahh, the tough life of the modern day "one and done" NBA-bound college freshman.  Similar to how Andrew Wiggins' bad tournament outing vs Stanford won't alter his draft prospects, Vonleh's Hoosiers failing to get in the big dance shouldn't hurt his status either.

The kid seems to have a pretty accurate perception of the lottery landscape and where he'll be taken.  After Wiggins, Jabari Parker and Joel Embiid, most mock drafts tend to vary.  The averaging landing point for Vonleh is right around #7.

Unless the Celtics have some lottery luck, they will likely be picking in the 5-7 range.  With a 7'4" wingspan, the Haverill, MA native should be able to play center in the NBA, a position where Boston has obvious needs.