Jimmer Fredette To Be Bought Out. Could the Celtics Be a Landing Spot? 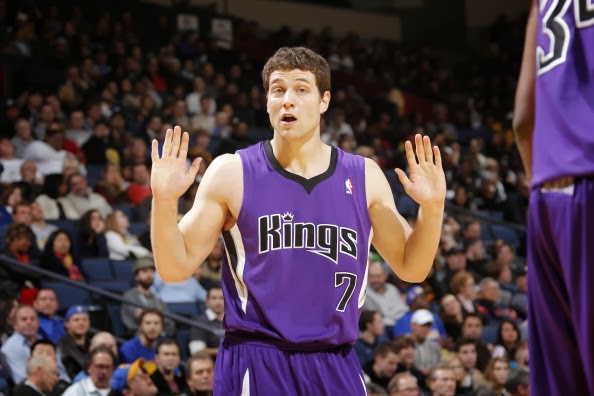 Well, file this one under 'curious decisions.' Adrian Wojnarowski of Yahoo! Sports is reporting that Jimmer Fredette and the Sacramento Kings are finalizing terms on a buyout. Fredette enjoyed a historic collegiant career at BYU, and was selected 10th overall in the 2011 Draft by the Sacramento Kings.

While he wasn't lighting the world on fire, it's not clear why the Kings are making this decision: Fredette is only on the books through the remainder of the season (his annual salary is roughly 2.4 million), and while his minutes are limited, he's actually shooting at an extraordinary level; finding himself just south of .500 from behind the 3 point line on 1.8 shots per game.

Tom Ziller of SB Nation, and founder/editor of SacTown Royalty had this to say about the man they call Jimmer:

The good news is that the Celtics could be a potential landing spot for him. If they're interested (and they should have the money to put in a claim), the Celtics can offer him the rare combination of opportunity and fit: Fredette would seemingly be able to take over the role of the team's backup point guard, and occasional starter. And Stevens' heavy motion based offense would play to Jimmer's strengths as a shooter and passer very well, while minimalizing his subpar speed and questionable playmaking.

To me, this seems like a no brainer for the Celtics.

UPDATED: It's unclear if the Celtics would remain under the luxury tax if they were to claim Jimmer. It figures to be awfully close.