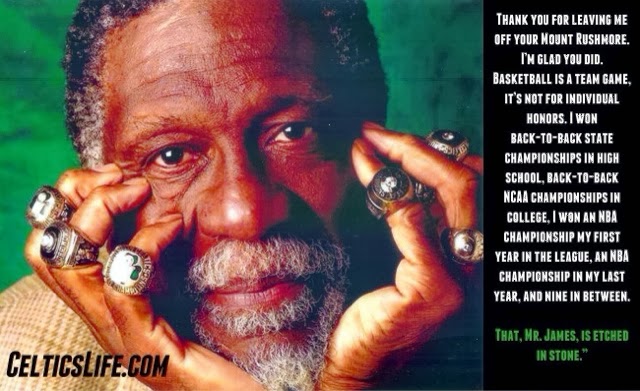 During NBA All-Star Week, LeBron James listed his Mount Rushmore of the NBA. Because it's LeBron James, it obviously kicked up dust. The heads King James would put on his Mount Rushmore include Michael Jordan, Larry Bird, Magic Johnson, and Oscar Robertson- all time greats certainly worthy of being part of the discussion. One name left off was Bill Russell, who celebrated his 80th birthday over All-Star weekend.
During the All-Star game last night, sideline reporter Craig Sager mentioned the Mount Rushmore discussion and had a quote from Bill Russell who addressed LeBron's Mount Rushmore statement. Russell, who is the undisputed greatest winner in the history of the NBA didn't have to say anything, but I am glad that he did. I hope the Celtics change their Green Runs Deep campaign to Etched in Stone immediately.