Why Rondo's struggles so far are the least surprising thing ever, and why he's NOT tanking 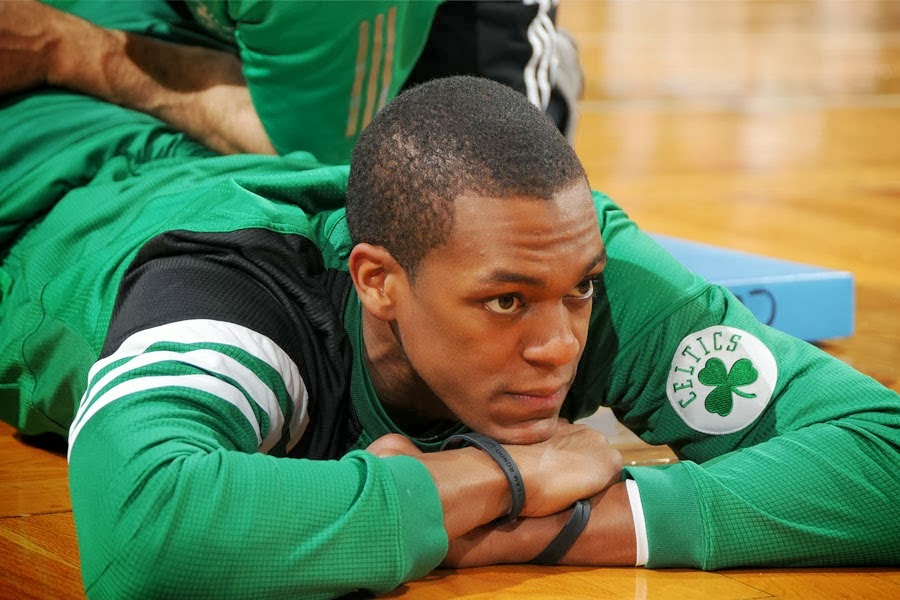 ACL injuries are extremely hard to come back from.

When you lose your ACL, you lose the stabilizing force in your knee. The thing that helps attach your lower leg to your upper leg, allowing you to change directions quickly. For an everyday person playing sports, it's vital. For an NBA point guard -- it may be the most important ligament in their body.

That's why Rajon Rondo's struggles thus far are not surprising. In fact, they were fairly easy to predict. You see, ACL reconstruction has three key phases:

1. Allowing the graft (the new ACL, either taken from your patellar tendon, hamstring or a ligament from a dead guy's body) to fully heal. This usually takes 6-8 weeks, and you can't do much until it's done. The new ACL is held in place by screws and elastics and all kinds of weird things until your bone grows over it. Super fun.

2. Rehabbing the knee. This is the part that takes forever, as you need to rebuild the muscle in that leg from scratch and reteach your "new" knee every movement imaginable. Walking, going up stairs, jogging, sprinting, jumping, pivoting, ect. You start slow and (hopefully) add new exercises one by one. Usually this is a 5-7 month process, but everyone is different.

3. Trusting the knee. While number two may take the longest, number three is not far behind. Even after your new ACL has fully healed and your muscle is back, there is a lot of fear that you're going to tear it again. Especially while you're doing the same activity you injured it in. Athletes can say they have no fear of it, but they're lying. After taking 9-12 months to rehab, it's extremely scary when you first return to sports.

Watching Rondo, it's clear that number three is holding him up a bit. Plus, there's the obvious issue of rust, which is not directly related to the knee but is a side effect of missing nearly a year.

While a guy like Adrian Peterson has taught us that ACL injuries are no big deal -- he's the outlier. A freakish outlier who does not represent a typical recovery timeline.

To further prove this point, let's take a look at three guards who have returned from torn ACL's over the last two seasons: Ricky Rubio, Iman Shumpert and Derrick Rose. Since Rondo has played in six games (a ridiculously small sample size), we'll use stats from their first six games as well. Below their post-ACL stats we'll throw in their stats from the season before to show the drop off.

I highlighted the statistical advantages to illustrate that nearly all of these guys were worse across the board when they first returned.

As you can see, all of these guys shot the ball terribly after long lay-offs, and the three point guards (Rubio, Rose, Rondo) all had significantly worse assist to turnover ratios. Lesson: when you sit out a year with major injury you don't look like yourself when you return.

That's why the thought that Rondo is "tanking" is nearly incomprehensible to me (for those not familiar, it's Gary Tanguay's newest HOT SPORTS TAKE, which Danny Ainge already laughed off). You're telling me that six games off a major injury he's already ready to be his old self yet is taking one for the team and losing/doing terrible on purpose to increase the Celtics chances at ping pong balls? And that Rondo, a truly cynical dude, is putting all of his trust in Ainge (a guy who has traded Rondo's best friend in Perk, his two mentors in Pierce and KG, and just about every other player Rondo has ever played with) that DA will give him a big money extension next summer no matter what?

I know conspiracy theories are the bees knees -- but this one is so poorly thought out. Rondo right now is thinking of one thing and one thing only: getting back to his old self. He needs to do that to secure a big time (possibly max level) contract extension, and so that he can get back to a level where he's dominating in the playoffs and hopefully contending for titles, whether it be here or somewhere else. Throwing games and playing like crap does not help that cause. In fact, if Rondo is willingly playing terrible the rest of the season he's pissing away about 30% of the time he has between now and the summer of 2015 to impress GMs across the league. That makes zero sense, unless when he went in for his knee surgery he also got a lobotomy and trusts Ainge to give him big money in 17 months, regardless of how the next 17 months go.

I mean, what if the Celtics get the 7th pick and whoever they select is just ok next year? Is Ainge going to want to truly blow it up and trade Rondo now that the re-build is going to take longer? Or does the pinky swear between the two outweigh what's best for the future of the franchise?

Or what if Rondo tears his meniscus at the start of next year and misses the season (ala Rose)? Suddenly Rondo is hitting free agency at the age of 29 with the following resume over the past two and a half seasons: Torn ACL, extended rehab, awful 40 games, torn meniscus (or another injury, just an example). Will Ainge still follow through on the secret agreement then? Or will he do what's smart and try and get Rondo back for cheap?

The bottom line is quite simple: Rondo has very little to gain and a ton to lose by agreeing to tank. The Celtics already suck (keep in mind this team was 14-26 when he returned and had just traded two helpful players in Jordan Crawford and Courtney Lee. It's not like they were some juggernaut that Rondo needed to derail), and Rondo is already up against the grain trying to complete the last stage of his rehab. It does him no good to give the Celts a slight increase in their lottery odds in exchange for him stunting his rehabilitation and possibly impacting his future earnings.

Rondo is smart, throwing games on purpose (for players) is incredibly stupid. This conspiracy doesn't fly.