Could Rajon Rondo be in cahoots with Danny Ainge on tanking? Ainge calls it a 'silly conversation' 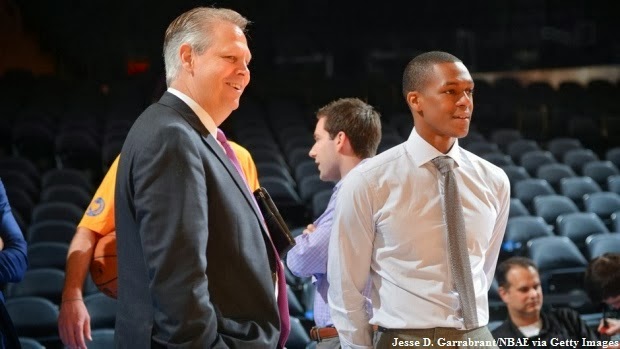 The Celtics have yet to win a game in which Rajon Rondo has played this season (0-6).  Even though it makes perfect sense the he's a little rusty coming back from ACL surgery (he's shooting just 27.9% from the field), I've still had my concerns as to why Rondo hasn't had a bigger impact on the team since his return.  While sitting through the pathetic blowout loss to the Kevin Durant and Russell Westbrook-less Thunder at the Garden last Friday, my friend in the seat next to me suggested that maybe Ainge has brought Rondo in on a tanking conspiracy.

There is definitely some logic to it.  All indications are that the Celtics appear intent on keeping Rondo here for a while.  It may well be in his best interests for the team to lose as many games as possible this season.  And with all his time sidelined, Rondo and Ainge would have had ample opportunity to discuss this option.

Apparently CSNNE's Gary Tanguay is a proponent of this theory as well.  Toucher and Rich of 98.5 The Sports Hub interviewed Ainge this morning, and began by telling him that Tanguay had brought up this idea.  They all shared a good laugh, and moved on to another topic.  Later in the show Tanguay called in to make his case, and here's what Ainge said in response:

"Players they're just not built that way.  Rondo tries to win at a game of checkers with his daughter.  He doesn't want to lose anything, anytime, any way.  I just think that's silly conversation."


Here's a link to the complete audio of the on-air interview, they return to this topic just after the 10 minute mark.  Tanguay restated his point on twitter shortly after as well:

@CSNEarlyEdition @Toucherandrich If Rondo is tanking it is an ingenious move to help the team long term! Fact! Not silly,
— Gary Tanguay (@Gary_Tanguay) January 30, 2014


Tanguay has also said time and time again that the only way the Celtics can win a title again in the near future is by trading Rondo.  Here's just one example:


I wonder if the tanking conspiracy theory might have him reconsidering his stance on this.