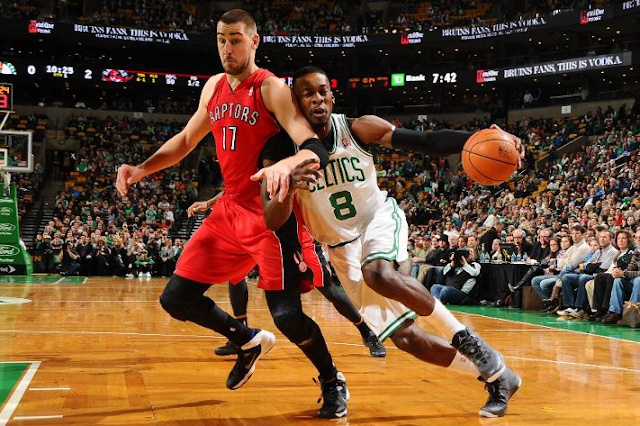 The energy at the Garden pre-game is jumping through the television as Celtics All-Star point guard is suited up and on the bench against the Raptors.

Heading into tonight’s matchup with Toronto, the Celtics are battling their worst losing streak since the 18-game skid of 2006-07 season.

After tumultuous day that saw the Celtics, Warriors, and Heat agree on a three-team trade that sent Jordan Crawford and MarShon Brooks to Golden State, for the first time this season there is no logjam in the backcourt. C’s rookie Phil Pressey got the start- the first of his career.

A slow offensive start for both teams in a foul-heavy first quarter. In what was most likely the last thing the Celtics needed, Avery Bradley left the game mid-way through the first quarter after injuring his hand. It could not come at a worse time as the Celtics lost three guards today with Crawford and Brooks heading west and Keith Bogans being excused indefinitely.

Production on both sides started to heat up as the first quarter came to a close with the Raptors leading the Celtics 25-23.

Gerald Wallace’s criticism of the Celtics has been a hot topic of debate all season. If he is unhappy with his team or his role he wasn’t showing it tonight, as Wallace lived up to his moniker “Crash” every minute he was on the floor. Steals, diving for loose balls, and solid offense from Wallace had the Garden on his side going into the half.

Both teams struggled shooting through the first two quarters. The Celtics were shooting 38% to the Raptors 40%. The difference in the first half was foul shooting- the Raptors were just 4-of-11 at the line.

The Celtics maintained their lead through the third quarter on the back of tremendous work by Jared Sullinger and Avery Bradley. Through the third period, Sullinger had 20 points and 17 rebounds which went nicely with Bradley’s 19 points. That’s Sullinger’s 10th double-double this season thus far. The cherry on top was a gorgeous in-bound pass from Wallace that Sullinger converted in a buzzer beater to close the third quarter with Boston leading 73-56.

Finds Sullinger: "THAT'LL GET HIM OFF THE BENCH!!! WHAT A NICE PASS, once again, from Wallace! The Johnny Unitas of the #Boston #Celtics!!!"

Despite leading by 18 at one point, the Raptors were able to get back into the game and cut the lead to 3 with 4:05 left to go in the game. Mike Gorman put it best, "Well, they're not sending this fourth quarter to Springfield." It was ugly. The Celtics were just 3-for-19 from the field with 2:05 to go in the fourth quarter. The final result was enough to make up for it as the Celtics snapped the skid at nine losses and are back in the win column with a 88-83 win over the surging Toronto Raptors.

Jared Sullinger continues to shine this season with his first 20-20 game in his young career. That's the first 20-20 night for the Boston Celtics since Kevin Garnett's first game in green. Sullinger finished the game with 25 points and 20 rebounds. Avery Bradley chipped in 20 points to go with 10 assists from Phil Pressey. Overall, it was a team win and a good way to set the table for Friday when the C's are back in action at home against the Lakers. And oh yea- some dude named Rajon Rondo will be back in action.