With every game Brad Stevens coaches, the Celtics become happier with Doc Rivers' choice to leave 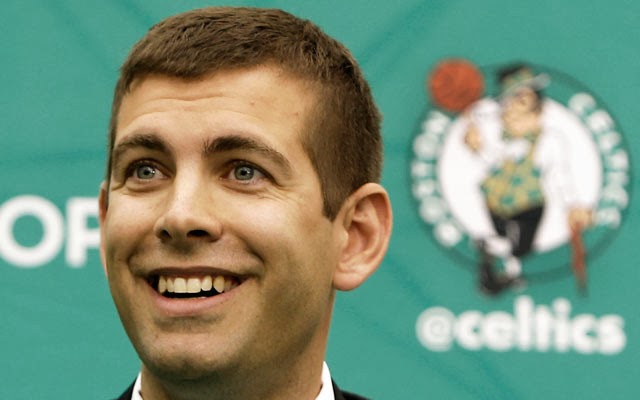 When Doc Rivers left for the Clippers back in June, it seemed impossible that the Celtics would hire a coach that was a better fit for their organization as it entered a rebuild. In the weeks after he left, we heard the names Brian Shaw, Brett Brown, and Vinny Del Negro, among others. Two guys seeking their first head coaching job, and a guy who had just been fired for the second time in three years. It's not that those guys are bad coaches (well Shaw and Brown at least), in fact, they may end up being very good NBA coaches.

But it was difficult to get too excited about them on the heels of Rivers' run in Boston. Doc had cemented himself as one of the top five coaches in basketball, and was a guy who's relationships with his players only seemed to get stronger each year. A trait that is incredibly difficult to find in a day and age where the average coach lasts only three seasons at the job, most of the time because their players tune them out.

But in July, Danny Ainge somehow pulled off the impossible. Seemingly out of nowhere he lured Brad Stevens away from Butler and signed him to a six-year deal to coach in Boston. The 37-year-old Stevens was coming off of unparalleled success at the college level, winning 77.2% of his games over his six seasons with the Bulldogs.

When he was hired, most folks were in consensus: Stevens would be a very good coach - in time. But the learning curve would be steep, and he was going to lose a lot of games during his first few seasons. The Celtics best player was injured, and their second and third best players had just been traded for a batch of mediocre players and a slew of draft picks. It would be a long season in Boston.

Only, it may not be so long after all.

Obviously, 23 games is no way to judge a season. After all, the 2006-07 Celtics had a 10-13 record (sound familiar?) after 23 games, and then finished the season on a 14-45 run that dropped them to 24-58, and the second worst record in the league. But that doesn't mean that we haven't learned anything about these Celtics, and especially Stevens through the first quarter of his first season. In fact, we've learned quite a few things.

We've learned that his players believe in him. That his never lose his cool mentality has rubbed off on them. And that they've come away impressed with just how fast he's picked up the NBA game. Just ask Brandon Bass and Avery Bradley (quotes from November via MassLive)

“From the beginning, even though we were losing, he stayed poised and he always believed we could be better. So I think that we kind of followed his lead and it translated to Ws for us,” said Brandon Bass. “There’s something special about that guy. He’s a rookie coach but very knowledgeable. He’s picking things up very fast.”

“Us being able to trust each other and our game plan. When our coach draws up a play we pay attention and we execute it, and we’re able to get everything we want,” [Bradley] said. “We always have confidence in (Stevens). And not only that, throughout the game he always makes us feel comfortable because he always has the same expression on his face.”

“Never,” Bradley replied when asked if he’d played for someone like Stevens before. “Like I said, it just makes us feel comfortable out there. Not to put any other coach down, but when you’re not making a shot or anything your coach might get on you. But Coach Stevens never will. He always has the same look so it makes you feel confident all the time.”


When you watch the Cs play, you can see the composure that Bass and Bradley are talking about. He rarely raises his voice above a normal decibel level, is always in control when talking to the refs, and big plays (both positive and negative) barely register on his emotional radar. This quality has seeped into his players, and allowed them to keep their cool in nearly every game this season. Through 23 games, the Celtics have had a shot at 21 of them in the 4th quarter  (exceptions: @ Minnesota and @ Houston). Only twice has a young team, without their best player, been overwhelmed by an opponent. Sure, they've had their problems closing games. But they are rarely overmatched. And a lot of the credit goes to the coach.

We've also learned that Stevens' reputation as a defensive minded coach has been earned. According to Synergy Sports, the Celtics have allowed only 0.86 points per play as a team, the 8th best number in the league. Some of that is thanks in part to a weak schedule (the Celtics have played the easiest schedule in basketball at the moment), but a lot of that credit goes to Stevens. The Celtics have prioritized three-point defense this season, and have allowed their opponents to shoot only 32.9% from beyond the arc, a number that ranks fourth in the NBA. It's no secret that the most efficient shot in basketball is the corner three, and Stevens has made sure that the Celtics defend it as well as any other team in the league.

And finally, we've learned that Stevens will admit a mistake and work to fix it rather than sticking with the status quo. His opening night starting line-up of Bradley, Jeff Green, Gerald Wallace, Bass, and Vitor Faverani was a major bust, so Stevens quickly made major changes. Bradley showed once again that he was a shooting guard, so Stevens put Jordan Crawford at PG and shifted AB to his natural position. Wallace proved himself better suited for a bench role, so Stevens moved him there. And Jared Sullinger was playing phenomenal basketball off the bench, so Stevens rewarded him with a starting job.

Stevens plays the best players the most, regardless of their age or reputation. Crawford was a guy that most Celtics fans wanted gone after his poor play last year, but Stevens saw something and stuck him at the point. Phil Pressey, Kelly Olynyk and Faverani are all rookies - yet all three have played roles on this year's team.

While there are still major hurdles to overcome, it's impossible to imagine any Celtics fan could be disappointed in what they've seen thus far out of their young coach.

Stevens' success has also made the fan base far more forgiving of Rivers. When he left, he quit on the team. After agreeing to steward the franchise through a rebuild, he bailed on them the moment it began. As great as Doc's nine years were here, there was a ton of anger and disappointment with how it ended. But just six months later, it's clear that both parties are better off. Doc is coaching a playoff team that should compete for the next half decade or so (in terms of winning 50+ games and making the playoffs - far from sold on the Clips as a title contender), and avoided the third rebuild of his coaching career. And the Celtics got a coach far better suited for the challenges ahead. A guy who has no vendetta against rookies, who's willing to deal with the mistakes, and most importantly - who wants to be here. It's way too early to say that Stevens is a better coach than Rivers, but he certainly is a better coach than a half-hearted Rivers who wanted to be elsewhere.

So hopefully tonight the fans at the Garden give Rivers a hell of an ovation to thank him for what he accomplished here. And then hopefully Rivers thanks Stevens for making people forget how it all ended.