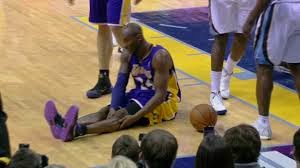 Things are only getting worse for Kobe Bryant and the Lakers. After Kobe's not so hot start back from a torn achilles, word has come out that he fractured a bone in his knee in the third quarter of LA's win in Memphis on Tuesday night.


Lakers announce that Kobe Bryant has a fracture of the lateral tibial plateau in his left knee. He is expected to miss 6 weeks.
— Marc J. Spears (@SpearsNBAYahoo) December 19, 2013


This leaves the 35 year old legend battling a torn achilles (lets face it, he rushed back), and this new fracture to the left knee. Which leave us with the question… is Kobe the worst contract in the NBA?

He has three years and $79 million remaining, which will take Kobe until he is 38 years old with however many more dings he may build up over the next couple years.  I am not quite ready to go there yet myself, he is still Kobe and could have a fresh bounce back next season. However one more injury could put him over the edge.

Kobe did play the rest of the game with the injury, kind of badass. Knowing him he will probably rush back from this one too. But these kind of decisions may be the ones that end Bryant's Hall of Fame career earlier than he intended.