Celtics uninterested in dealing Rajon Rondo, want to find out how good he and Brad Stevens can be 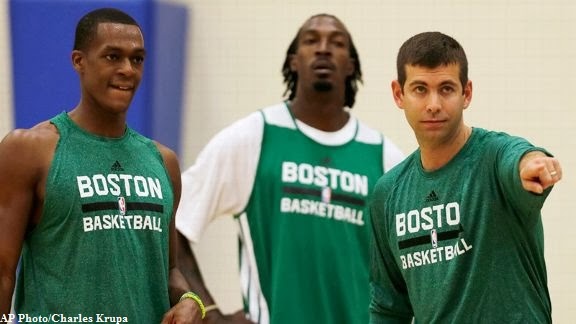 Earlier this week, while discussing the likelihood of acquiring Omer Asik, the Boston Herald's Steve Bulpett also included this little nugget about the possibility of the Celtics trading Rajon Rondo:

And in a separate issue, as regards Rajon Rondo, matters have yet to be opened. Several sources are now insisting that the Celtics have grown even more committed to seeing how well the Rondo-Brad Stevens combination, already in harmony off the court, performs in games.


Former Celtic and current radio analyst Cedric Maxwell also went on CSNNE the other night and said the following:

"Well I talked to Wyc Grousbeck, the owner, and one thing he said in a small conference to me, he said, 'I am not trading Rondo.'"


While the Rondo rumors are never going to stop, it makes perfect sense that Boston would want to see how well he performs with his new coach before even considering dealing him.  After 27 games (a third of the season) the Celtics appear closer to finishing with a top-four playoff seed in the East than they do with a top-four pick in the draft.  It may be time to rethink the outlook on this season.  If you're Danny Ainge why not say to yourself "Screw it, we're here anyway.  Let's get Rondo back, see what kind of magic he and Stevens can work together, and make this year interesting."  At this point it's probably a better option than trying to keep up with the ever growing number of potential tankers.