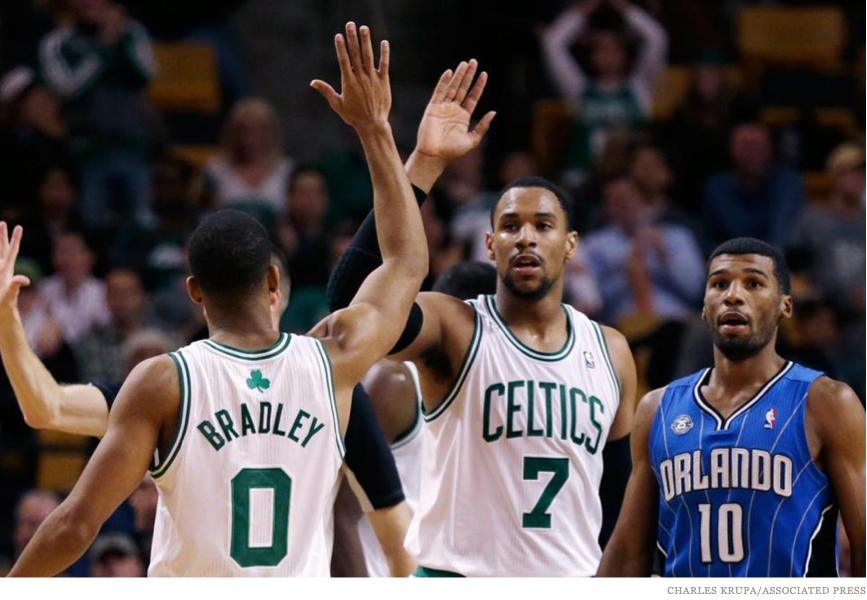 The 2013-14 Celtics will be described as many things. Directionless. Rebuilding. Tanking. All terms closely related to a team that traded away it’s superstars in hopes of fortifying the future. One word that should work it’s way into the 2013-14 description rotation should be Chippy, as that is how the Celtics are currently playing.

Jeff Green is NOT a third best option. Gerald Wallace is NOT washed up. Kris Humphries CAN contribute. Crawford and Bradley ARE worth resigning. Rondo CAN lead a team when two future HOF players aren’t running beside him.

Still, not surprisingly, there are doubters surrounding this team. ESPN’s Marc Stein has shown as much since the preseason. It is going to take a lot to get out of the Eastern Conference basement this season – both from an opinion standpoint and as the season rolls on.

While the NBA season is barely 8 games old, 2013-14 is shaping up to be a truly weird one. Waiting in the wings is the 2014 draft class which is projected to be the greatest draft class to hit the Association in decades. That is causing teams and fans alike to root for things they normally wouldn’t.

Perhaps the best thing for the Celtics to do would be to throw in the towel on the next 70+ games. Maybe they’ll be able to lock up a Wiggins, Randle, or Parker if they do. Perhaps it would be best to trade Rondo to the Lakers or Green to the Rockets or whomever to where ever in hopes of clearing enough space to surround your rookies with all-stars. Perhaps we should just throw the ol’ tank sticker on this team and catch up on Boardwalk Empire, The Walking Dead, and Game of Thrones instead of tuning into games that the C’s will certainly be (or should be) losing.

Lots of people are suggesting this course of action, but one thing is for sure- those people are not wearing green & white jerseys. These Celtics aren’t currently playing for draft position; these Celtics are playing to win, and the prize may be different then you’d expect.

While an 18th Banner may not be within reach for the Celtics this season, I wouldn’t want to be the guy suggesting it to one of them. These guys are playing for respect – something completely worth scraping over.