Yo can I borrow your car? The strange tale of Cyrus Mann


As Celtics' training camp is underway, and the conditioning drills and meaningless preseason games are on the horizon, I found it to be the most appropriate time to remember one of the funnier stories regarding this time of the year.  If you thought Joe Pace was the only guy to walk out of Celtics' training camp, drive-away and never play in the NBA again, you'd be wrong.  In fact he wasn't even the first center to do it for Boston.

Three years earlier back in 1975 Cyrus Mann was a rookie-hardship case with the Celtics.  Boston had picked him in the 4th round of the draft out of Illinois State.  Well after a Sunday session, September 29th, he asked fellow Celtic-hopeful Larry Cannon if he could borrow his car.  Cannon obliged.  Some time later Cannon received a call from Mann who announced he was at Logan Airport in Boston and that he'd leave the keys to the car in the ash tray.  And for 10 days that was the last anyone saw of Mann or Cannon's white Cadillac convertible.

Red Auerbach for one was speechless and only told the press that Mann was added to the suspended list.

10 days later, Cannon's car showed up and Larry for one, played it cool:

It was all a misunderstanding. They found it at Logan Airport, it had been there all along and nobody saw it.  There was even a $20 bill left in an envelope to pay the ticket, just as Cyrus said. 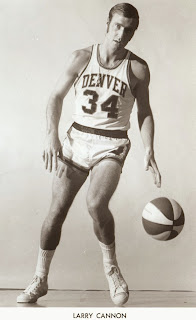 Cannon had reported the car missing when it wasn't found initially at Logan.  Mann meanwhile was found in Detroit.

As for Larry, he forgave and forgot:

It's all forgotten about.  Besides, I think I'm going to trade it in.


No word on whether Frankie Sanders traded for it.

Neither Cannon nor Mann made the Celtics' squad that year and while Mann never appeared in an NBA game, Cannon certainly did, while also dabbling in the ABA.  Cannon also acquired the nickname "Avis" for the incident.  Mann meanwhile had a lengthy career playing professionally in the Philippines.

And just to make Frankie happy, here's the car itself: