What constitutes a successful/failed season? 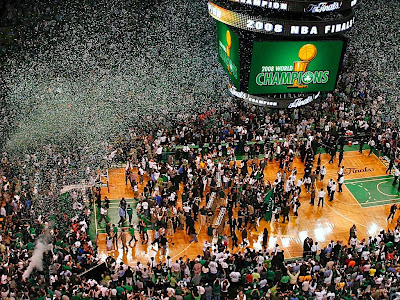 For the last several years the slogan has been "Championship or Bust", but now the goal is to make the playoffs, and expectations can vary depending on what you consider "success" or "failure".

In my opinion, if the Celtics miss the playoffs, I won't consider it a failed season as long as I see player development among Rondo, Bradley, Sullinger, and Green. For me, the Celtics can miss the playoffs as long as Bradley bounces back from his bad season, Rondo returns to double-double status, Sullinger turns into a double-double machine (or at least close to it), and Green becomes the consistent 17+ point scorer that he's shown he can be in the better half of last season.

My expectations for the rookies like Pressey and Olynyk aren't terribly high, but I wish them the best nonetheless, and I do wish that both of them receive rookie honors like the Rising Stars game, but if it doesn't happen I understand. I just hope they become more productive in the future. My expectations for the other young players like Crawford and Brooks aren't high either because I don't think the future rests in their hands (although I could be wrong).

A failed season in my opinion, would be to see none of the players from above improve. There's a good chance of this happening since Rondo would be coming off of a season-ending injury, and Sullinger will be starting pre-season out of game shape (I'm not blaming him, but it still sucks). This can all be offset if despite all that, they still make the playoffs (even as the 8th seed), because that'll at least boost morale among the young players for the next season. It'll also show the NBA and the fans that they shouldn't count out the Celtics.

If the Celtics stink the season up, miss the playoffs, show absolutely no type of individual game improvement from last year, but get a top 5 pick in the draft, I'm not counting that as a successful season (others might, but not me). It'd only be considered successful if that was Ainge and Stevens' goal to begin with, but both men have repeatedly said tanking is not the objective so I won't count that as a success.

What about you? What would you consider a successful/failed season for the Celtics?