So many players, so few minutes 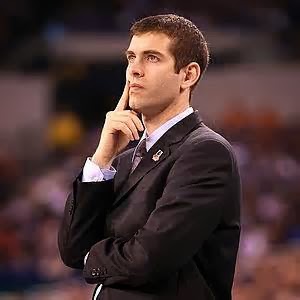 Brad Stevens certainly has his work cut out for him.

Not only does he need to prove the "college coaches don't succeed in the NBA" doubters wrong, but he has to do it with a system that gets the most out of the players Boston has and also show enough promise to free agents to entice them to sign with the Celtics during the rebuild. How Stevens will use his motley crew of power forwards and shooting guards will be very intriguing, but the bigger question will be how many minutes each player gets.

Here's how the depth chart looks to ESPN's Chris Forsberg:

There are some caveats to this. When Rondo comes back Bradley figures to slide into the starting two-guard spot, pushing everyone else down the depth chart and Faverani more than likely will not begin the season as the starting center, as he is a work in progress.

There are plenty of players on this team that one could make a case for getting lots of playing time. Whether it's boosting the trade values of guys like Bass or Crawford or seeing what the team really has in the youngsters Brooks and Olynyk. Now there are only 48 minutes in a game and to complicate the issue, Stevens talked on media day of playing Green and Wallace at other positions other than small forward. Great, because this team needs to fill minutes at power forward and shooting guard....

It does look like there will be some odd guys out when the season starts up. No one is really looking at Bogans to get a ton of playing time, but don't expect to see much of Olynyk, Brooks, Crawford, Faverani or Pressey either. Stevens is going to try to win every game the Celtics play and that means riding Rondo (when he's back), Green, Bradley, Humphries, Wallace, Sullinger, Bass and Lee in that order, barring an injury or trade of course. Hopefully the youngsters won't get too upset about their lack of playing time and who knows, maybe Brooks or Olynyk will show Stevens something and might be able to steal a few of those minutes from Lee and Bass.

Judging by what people are saying about him, there is little doubt Stevens will figure out the best way to proceed. Should still be interesting to see how it all plays out.