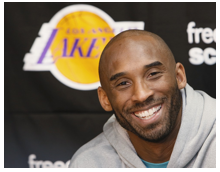 As he limps out, center Dwight Howard cruises in. “What the f— is going on?” Bryant asks a trainer. “Dwight got ejected,” he is informed. In the retelling, Bryant waits eight seconds to utter another word, looking as if he might literally bite his tongue. “Sports have a funny way of doing s— like that,” he says.

L.A. is about to be swept and Howard is about to leave for Houston, where he will forfeit $30 million and avoid discomfort. But Bryant is the rare modern athlete whose presence can transcend playoff results and free-agent decisions. Sometimes, just seeing him is enough. “The long year, the injuries, the Shaq stuff, the Phil stuff, it all came to a head when I walked out to the bench,” says Bryant, who was serenaded with a standing ovation and MVP chants. “It was the first time I ever felt that kind of love from a crowd. Oh, my God, I was fighting back the tears.”

As bad as everyone is saying the 2013-14 Celtics might be, we are not the only team facing a fall from grace. If I told you the Lakers might have it worse than the Celtics would that somehow take the sting out of the 1-5 preseason record?

Let's assume you said yes. The Lakers are going to be awful this year. Kobe Bryant is battling back from injury like so many franchise players this year and without the captain steering that ship, the Clippers have a very good chance of becoming the kings of LA... at least for a little while.

Last year, in the midst of the "Will He or Won't He... Of Course He Won't" Dwight Howard drama that swept over the Western Conference Playoffs, the crowd erupted for the only thing worth erupting for in Laker Country- a Kobe Bryant playoff appearance.

I'm going to go on record by saying I don't like the Lakers. I do, however, respect the hell out of Kobe Bryant's basketball career. He has been the greatest villain in sports. He has been the greatest foil the Celtics have played in modern basketball. He is everything that Jordan, Bird, and Magic were not from a PR standpoint and every bit as good as they were on the court. To this day, getting the best of Kobe on the court come with getting some sort of certificate of achievement because that is an accomplishment.

Having said all of that, I really liked this clip and hearing that the fans got to Kobe. He's so often viewed as a basketball machine. A cold blooded killer on the court. The Black Mamba. It is nice to be reminded that professional athletes at the highest level don't always play for money- they play to be the greatest.

And having said all of THAT, this ovation is a 1 on the hero worship chart compared to when Paul Pierce made his return against the Lakers in 2008.