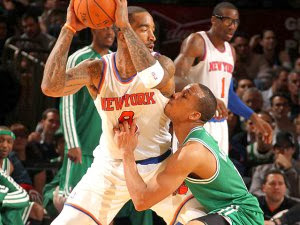 Avery "Game Changer" Bradley has made his name with the way that he plays defense.

His aggressive, all-out effort style is almost his trademark, and has earned him praise around the league. LeBron JAmes once called him one of the best defenders in the league.

His style does have it's downsides though, Bradley has struggled with injuries in his short career, and has struggled to find a rhythm on the other end of the floor. This year, Stevens is asking Bradley to change his style a bit.


“I was always on the ball last year so I could get time off the shot clock, but this year they want me to calm down a little bit more, not be so reckless I guess you could say on defense,” Bradley said Tuesday after a morning shootaround at the Barclays Center. “They want me to be disciplined, pick my spots every now and then, pick up fullcourt but get back and play angles. They’re just trying to make me into a great team defender, as well as an individual defender.”

So, this might not be a drastic change. Stevens elaborated by saying that they want Bradley to become even better off the ball, not just on the ball where he's made his name. It's also implied that the Celtics intend to use Bradley to defend each team's top scorer, like the Celtics' version of Aqib Talib if you will.

Do you agree with the changes the new coaching staff is proposing? Can Avery Bradley become an even better defender?