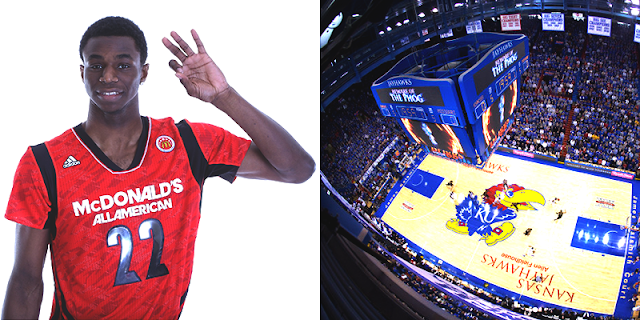 After looking at this highlight video it is easy to see why people are excited about Wiggins upside but he is wise to play down the comparisons.

After all the basketball landscape is littered with players who were supposed to be the next so and so only to fall far short of these expectations. Some said Danny Ferry was the next Larry Bird. Lamar Odom, in high school, drew comparisons to Magic.

And, of course, who can forget USC's Harold "Baby Jordan" Miner.

The LeBron comparisons are especially unfair. Wiggins clips are impressive but if anyone who remembers watching LeBron's highlights from high school it was like someone created CGI of a hardly believable ridiculously gifted athlete of that age.

LeBron, in high school, had me jumping out of my seat and grabbing my head in disbelief. Wiggins, on the other hand, doesn't have the utter "wow factor" LeBron did. At least not for me.

In fact the closest anyone's highlights from high school have gotten me to as excited as LeBron's are South Carolina's Seventh Woods from his freshman year; but his tape is also edited exceptionally well.

Not to mention, Woods is so young and only 6'2", which adds to the mystique.

The truth is Wiggins is amazingly explosive and has a smoother/better jump shot then LeBron at the same age. However, he doesn't have the same passing ability and physicality James had and they are two completely different types of players.

Whatever happens in Wiggins' basketball career, one thing's for certain, it's going to fun watching his development and The Jayhawks play this season.

Kansas also has Joel Embiid and Boston's own phenom, Wayne Selden, coming in to play as freshmen.