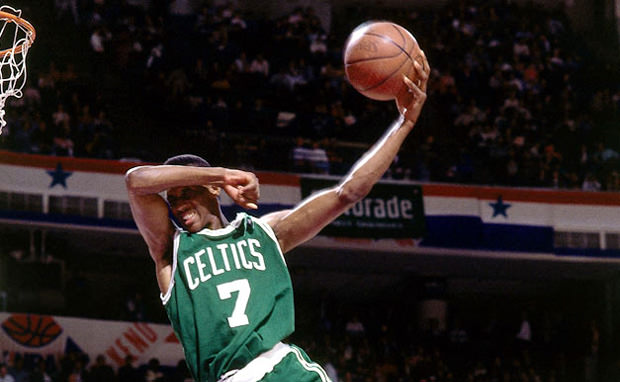 Dime Magazine recently interviewed former Celtic and 1991 Slam Dunk Contest Champion Dee Brown.  When the topic of his now legendary jam came up, Brown stated that he didn't even plan it ahead of time:


You know, I tried that last dunk which I had never practiced before. I made that dunk up on the fly, the no-look. I had never practiced that dunk before. That was the first time I did it so either I was going to run to the side of the backboard or we’d be talking about it 20 years later, so everything was spontaneous. You know, certain things come to you and it just did. But that was the great part about that.


Brown also discussed his memories of Gerald Green recreating the no-look dunk on his way to winning the contest 16 years later:


I remember, I was working for ESPN at the time and he called me and he said, “Mr. Brown” — you know he made me feel old. He said, “Mr. Brown, I want to do your dunk but I want to put a little twist to it. Can you come out to Vegas because I want to have you as part of the prop,” and at that time I couldn’t get out there and I felt bad but he ended up doing it. He jumped over Nate Robinson, he had on the seven jersey, had the pumps and did the no-look (while) jumping over Nate. To me that was the best one because he was a Celtic at the time, he was a Reebok guy, he did the dunk, had my jersey on, and did it with the shoes so it made you feel good to have a guy that came after (you) give a tribute to you by doing that dunk in the dunk contest and kind of asking your blessing first for doing so.


And here's what Brown had to say when Dime asked if he could still pull off the feat today:


You know what man? I always get challenged by these guys that ask if I can still dunk and I still can dunk. There was a Pump event a few months ago at the Rucker that I did for Reebok and you know you can’t embarrass yourself at the Rucker. There’s always playground legends at the Rucker so I threw one off the backboard and dunked it in jeans at 45 years old. People still think that I can’t dunk but I can. But to do the no-look dunk, you know what, I don’t think I have enough health insurance to try that (laughs).

When I was thirteen years old Dee Brown was my favorite athlete on the planet, so I feel obligated to include the national TV spot Reebok featured him in after his title as well: