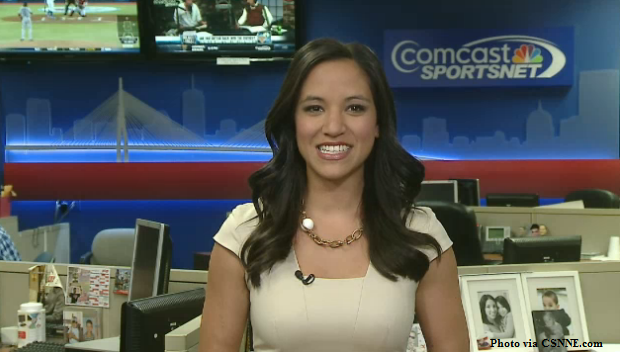 Familiar faces Greg Dickerson, Gary Tanguay, and Donny Marshall will no longer be a part of Comcast SportsNet New England's Boston Celtics television coverage this upcoming season (although Tanguay and Dickerson will both continue on with CSNNE).  Dickerson's sideline reporter role will now go to Abby Chin (above), who's been with the network since last December (I expect this will do wonders for Ms. Chin's @tvabby twitter account).  Kyle Draper will take over the position in studio of pre/post-game show host previously held by Tanguay.  Meanwhile Marshall's chair opposite Tanguay will be filled by a variety of rotating guests, including Sports Illustrated's Chris Mannix, one time Providence Friars Head Coach Tim Welsh, former Celtic great Dave Cowens, and Tommy Heinsohn (who no longer travels) for home games.

But the most intriguing news of all is who will be filling in for Heinsohn courtside with Mike Gorman on the road.  Last year Brian Scalabrine often provided the color commentary during away contests, but Scal has moved on to a coaching position with Golden State.  This year Cowens and Cedric Maxwell will both take the place of Heinsohn on occasion, but it's the two other names that jump out: Former Celtic and Fall River, MA product Chris Herren (who's remarkable story I can't even begin to tell) as well as Boston's president of Basketball operations himself, Danny Ainge.