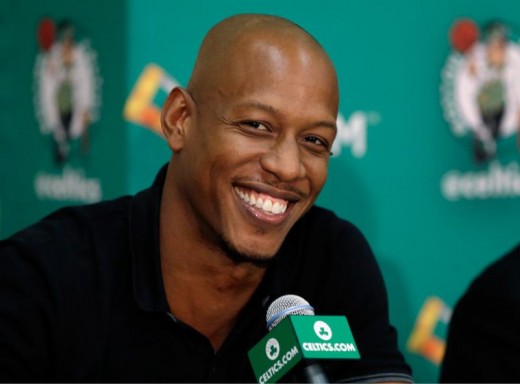 Before we jump into day three of "Camp questions", it's important to note that our first camp question — whether Donte Greene would make the Celtics — has already been answered with a big, fat no. Quick answer from Danny Ainge right there.

Bogans is an NBA journeyman. He was drafted by the Bucks in the 2nd round of the 2003 draft but quickly traded to the Magic for cash considerations. Since then he has played for:

Of course, the last two were both with the Nets. But it just goes to show, even in an off-season where he stays put, he still moves. For his career the 33-year-old shooting guard has averaged 6.4 points, 2.7 rebounds and 1.3 assists per game while shooting 39.4% from the field. That low field goal percentage is largely linked to his propensity to shoot threes, as over 53% of his career attempts have been from deep, and he has knocked down a remarkably average 35.3% of those shots.

When the Celtics and Nets made the famous "KG/Pierce" deal this summer, they needed more salary from the Nets to balance things out. The solution was to give Bogans, an NBA journeyman who made $1.2 million last season, a major pay raise to over $5 million this season. The contract had nothing to do with Bogans play, and everything to do with NBA trade rules. By signing-and-trading Bogans to Boston, the Nets could acquire Pierce, Garnett and Terry. And by agreeing to sign Bogans, the Celtics could simultaneously do two things:

A. Complete the trade and pick up a valuable $10.3 million trade exception from Brooklyn.

B. Give Bogans the necessary money for 2013-14, but make his future salaries non-guaranteed. This means that Bogans becomes a $5 million expiring contract this summer.

What does that mean for the Celtics? Well, it actually makes Bogans a fairly attractive trade chip. Expiring contracts always have value, and Bogans is actually the 25th largest expiring contract in the NBA this season. The Celtics also have the expiring contracts of Kris Humphries ($12 million) and Jordan Crawford ($2.1 million), giving them just over $19 million in expiring deals. This means that if the Celtics feel like there is a buy low superstar out there, they can package these deals with some of their other assets (namely the nine first round picks they have collected between 2015-2019) and try and make a move. Making Bogans deal even more attractive is that it has no guarantee date for next year, meaning he can actually be traded next summer and immediately waived by a team. This could be a very attractive chip for a team looking to dump a player as they can quickly slash $5 million off their payroll.

So yes, Bogan's deal is a pretty good trade chip. But that doesn't mean he's not incredibly overpaid. Which leads us to..

2. Is Bogans the worst player in basketball to be making over $5 million?

Take a look at this list. There are precisely 136 players making at least $5 million (not counting four retired players with cap holds of over $5 million), yet it is really difficult to find a worse player than Bogans on the list. Again, I'm not saying the most overpaid, or else Amar'e and his $22 million salary run away with the competition. But instead, is he the worst out of the 136 making at least $5 million?

I think he is. Sure Richard Jefferson is now useless, but at least he was still serviceable as recently as two seasons ago. And yea, Jason Richardson is injured, but the man still averaged double-figures last season when healthy.

A few other guys who join Bogans as $5M+ players that may not be in a rotation this season: Landry Fields and Michael Beasley. But both of them have the advantage of being young. Bogans on the other hand is 33. Advantage other guys.

3. Does Bogans have any shot of breaking the Celtics rotation?

Ok enough about Bogans salary. Let's talk about him as a player.

As we discussed a little in the "about" section, Bogans is not a very good offensive player. He can shoot the three a little bit, but that's his only real skill and he's actually slightly below average at it (Bogans career from three: 35.3%, NBA average: 35.9%). Besides that he doesn't bring much to the table.

His career rebounding percentage (% of rebounds that he grabs while on the floor) is only 7.3%. Well below average, even for a SG. His assist percentage (9.3%) is adequate until you look at his turnover percentage (which is 12.2%) and realize he turns it over a higher percentage of the time than he assists on a basket. His career PER is also only 9.6, considerably below league average (which is around 15). And if you've ever watched Bogans play, the eyeball test matches the advanced stats. He's kind of like the guard version of Jason Collins, somehow playing decent minutes without wracking up any tangible stats. You could watch Bogans for 20 minutes and not even notice him out there.

He has been lauded by past coaches, including former Celtics assistant and current Bulls coach Tom Thibodeau, for his defensive acumen and basketball IQ. But last year, the defensive ability appeared to slip big time. Here's a look at his last three full seasons (he only played five games in 2011-12 so we're throwing that one out).

All stats via Synergy Sports

By the way, NBA average is right around 0.85 ppp allowed, so it's not like Bogans started off as Avery Bradley and then slipped to average. He started off around average, and slipped to terrible.

So he's a veteran known for his smarts and defense, only he's not very good defensively. Not a good combination.

He's also fighting a massive uphill battle for playing time as he is one of five shooting guards on the roster (Bradley, Courtney Lee, MarShon Brooks and Jordan Crawford being the others). Considering all four of those guys are younger with more upside (not to mention better players), Bogans chances of being a contributor this year most likely revolve around at least one, and more than likely two of those guys going down with injuries. Let's hope it doesn't come to that.


Ok, not the rosiest of pictures on our good friend Keith. But remember, he's making $5 million this season to sit on the bench. So don't feel too bad for him.

For the rest of the "camp questions" series click here