Brad Stevens envisions the Celtics as a running team 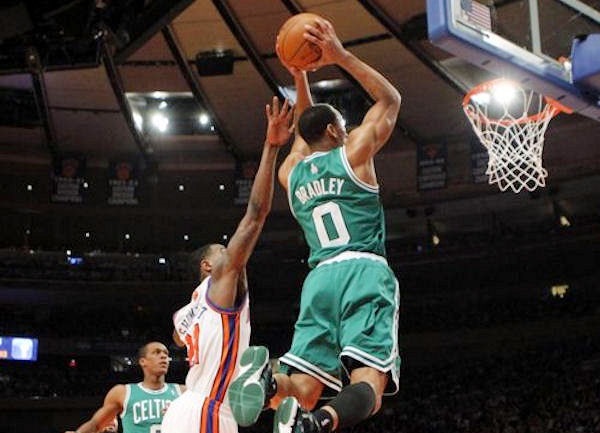 There are five players on the current Boston roster that the average Celtic enthusiast might consider as building blocks for the future: Rajon Rondo, Avery Bradley, Jeff Green, Jared Sullinger, and Kelly Olynyk.  For now I'm going to refer to them as the "core 5."  Most fans are probably hoping for that group to become the starting five as well, but we'll cross that bridge when we come to it.

Any sort of success the C's have in 2013-2014 may likely depend on how well the "core 5" come together and develop as a unit.  Looking at the strengths of these players, my guess is their best chance for victories will be to get out and run as much as possible on offense, and simply work harder than their opponents on defense.  It appears new head coach Brad Stevens has similar ideas.  Stevens recently sat down with CSNNE's A. Sherrod Blakely, and shared some of his thoughts on the upcoming season:


CSNNE.com: What style of play do you envision for this Celtics team, and will that be the same or different from the style you are accustomed to coaching?

STEVENS: "I don't think style of play is defined by coaches. I think it's defined by who the players are. You try to fit with your players to the best of their abilities at both ends of the floor, while at the same time provide a framework for which we can all work together.
"What I would like to do and what I see as a really positive thing with this group, is playing in transition with a lot of spacing. We have bigs that can really shoot the basketball. We have guards that are very athletic that can get into the paint. We got a couple of wings that can run the floor and do things in transition that are really high level. And then we got guys that can score off spacing, that can score off cutting and score off the bounce."

CSNNE.com: And what about the other end of the floor?

STEVENS: "The other side of the ball, we want to be as connected as we can be. I'm a big man-to-man guy. We will mix in some zone here and there and we will do some things in certain situations that's a little unique. But we will play hopefully an aggressive, solid man-to-man defense."


If you are among those of us who think "tanking" is a bad idea, you have to be encouraged by what Stevens has to say.  Click here to read the complete interview.