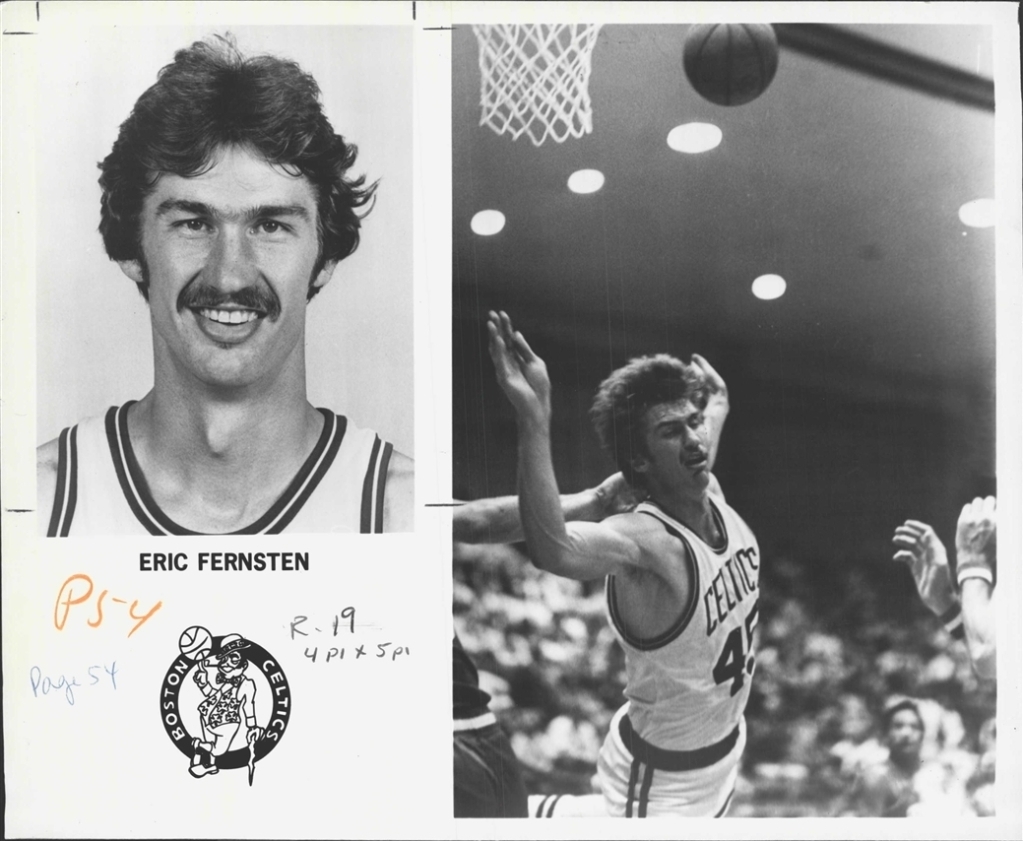 What the Hell Happened To, is usually all about perseverance.  Unheralded guys going the extra mile to make the mighty Boston Celtics.  This week's player, Eric Fernsten, epitomized that.  His entire career, he never quite felt safe enough about his job but it was always like that for him.  It was that way since he began playing basketball seriously the summer before his sophomore year at Oakland's Skyline High School (same high school Gary Payton would later attend). He worked very hard while at the University of San Francisco, hard enough to be drafted in the 4th round by the Cavs in the 1975 draft.

But his sense of belonging was always in question.  As a rookie with the Cavs on Thanksgiving Day of 1975, after appearing in 4 games, his belongings had just arrived from the West Coast.


"I had just finished unpacking my stereo and other things and I went to practice," Eric recalls. "That's when I learned I had been traded to Chicago."


"It was Nov. 17, 1976," he says. "The Bulls had just traded for John Mengelt. And Scott May, who had been out with mono, was coming back. So they waived Paul McCracken and myself."


Two weeks later, after Fernsten was cut by Chicago, he found himself in Belgium.


"They said to me, Here's our big gym.' I walked in, and it had a concrete floor with linoleum on top. It seated 200 people. I almost cried."


After Belgium he'd play in Italy for the next two seasons.  So during his first 2 months in Boston, after signing in June of 1979, he slept on a bare mattress (can you blame him?).

Fernsten's chance came when Dave Cowens went down with a hyperextended left big toe. Until then he had been just another face at the end of the bench, playing a mere 77 minutes in 47 games. Garden fans wondered why he'd been kept around.  "Every player in the league," said head coach Bill Fitch, "wants to be a lead man, and obviously they all can't be. If Eric continues to improve, he can cement himself as a backup center and power forward in this league." (Hysterical seeing Fitch's quote from then and taking it into context of today's height-challenged NBA, where Fernsten wouldn't sniff playing a minute at the power forward).


But don't think Fernsten was some goofy, mustachioed big guy; that would be very inaccurate.  He had his moments with big scoring outbursts.  He worked extremely hard in practice.  He was also much more athletic then folks gave him credit for.  While Greg Kite was more of a physical presence in the future, Fernsten played a bit more like Semi Erden (for fans who weren't alive back then).  Seeing that Eric was just a touch before my time, I defer to my venerable Celticslife colleague, Cort Reynolds for a personal Eric Fernsten experience:

I remember going to a Cavs game as a kid vs. Boston.  Fernsten was out on the floor with Bird 1.5 to 2 hours before the game working on fullcourt ballhandling drills and running the floor. That's the sort of thing that keeps you in the league a long time if youre 6-11 and don't gripe.  I know Bird always sided with those guys who worked hard like Kite and Fernsten but didn't get to play much. that sort of thing bonds a team when your superstar works like the 12th man and treats them well.


This is very much true and Bird even said it himself in Jackie MacMullan's book, Bird Watching: On Playing and Coaching the Game I Love:

You never knew when you'd be called upon. I tell them of an old teammate of mine, Eric Fernsten, a 6'10 guy who didn't get to play too much.  It was 1981 and we were playing for the best record in the league that season.  We flew to Houston for a game with the Rockets and we ran into a lot of foul trouble.  Eric had to go in. Fernsten was one of those guys who kept himself in good condition even though he never really got to play in the games.  He gets in there and we shoot a free throw and miss it.  But Eric gets his hand up there and tips it in.  It gave him confidence and a few minutes later he got another basket.  We won that game and it helped us win the best record in the league. 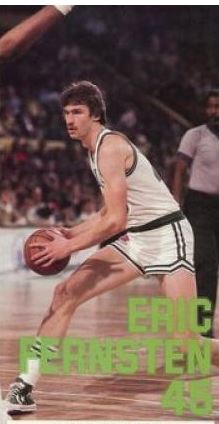 And so did teammate Cedric Maxwell after one particularly strong Fernsten performance in 1980:

"Every player on this team can play," said Maxwell. "Eric just needed a chance, and now with Dave (Cowens) out he's getting it. He gives me fits in practice. What you're seeing now is the real Eric Fernsten."


After 3 years with the Celtics, Eric was waived by Boston in October of 1982.    But not without some pretty hard feelings.  He was diagnosed as having a hernia condition that required surgery.  He even had a pending lawsuit against the Celtics for releasing him while being cognizant of his condition (that was the summer the Celtics drafted Darren Tillis, also a center. I think they thought Tillis would fill in for Fernsten.)  There were definitely hard feelings by Fernsten at the time towards Boston.

He'd return to Italy for another season before coming back to the Knicks for the 1983-84 campaign.  He actually did have an invite from Red Auerbach to come to the Celtics' camp but because of the terms he left on, Fernsten declined.  That year in New York would be his last year in the NBA.

The most surprising visit I received was from Eric Fernsten, who played for the Celtics for three years at the beginning of the Bird era and was now pursuing a career as a stock broker.  What shocked me is that I really didn't know Eric all that well.  When he was with the team he was always friendly, courteous, quiet and reserved.  He'd be sitting on the plane reading every article from the Wall Street Journal while the other guys on the team were looking at the sports, boxscores and comics.  In short Eric was not your typical jock.  So when he walked into my hospital room carrying a huge floral display (which had a green Celtics sneaker as the centerpiece), it was totally unexpected.  Here was a guy who hardly knew me, yet had knocked himself out to show he really cared.

Eric has his own youtube video, where he incorporates a bit of his intellect by showing that he was indeed fluent in Italian:


How cool is that?

As Most eludes to earlier, Eric did become a stockbroker in Boston for a little bit of time actually.  However, today Eric is an electrician in the Castro Valley area, part of Alameda County, California.  He has been employed by Rosendin Electric Incorporated and also possibly worked for Metropolitan Electric at one point.  He lives with his wife Kathleen in Dublin, California.  He did not reply to a friendly email sent out by Celticslife.  However we still honor his heroics in helping the Celtics obtain Banner 14.

Special shout-out to Cort Reynolds for filling in some valuable information on Eric's career.  Definitely check out his epic book on the 87 Celtics, "The Greatest Team That Should Have Been" and the Larry Legend Nostalgia Basketball book, located halfway down the page .