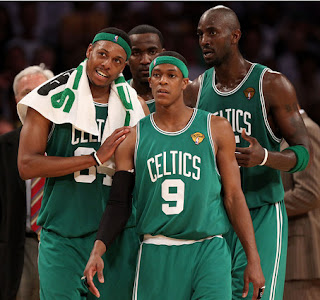 As we await Rajon Rondo's return, let's take a look back at his phenomenal performance in Game 2 of the 2010 Finals.

The Celtics were down 1-0 to the Lakers and desperately needed a win. Though Ray Allen stole the show with his record-setting 8 triples, Rajon Rondo assisted almost all of them to finish with 10 assists, 19 points, and 12 rebounds. This wasn't one of Rondo's most astounding stat-lines, but he truly controlled the game, exerting massive amounts of energy while still only committing 2 fouls and 3 turnovers.

With all the recent talk of how Rondo isn't a franchise player or can't lead the team, I find it funny that people have somehow forgotten about #9's incredible playoff runs. He's not a top 10 player in the regular season, but when it really matters he has had 3 postseasons of being top 5 (2009, 2010, and 2012). Some seem to have convinced themselves that Rondo isn't a "winner," when the exact opposite is true. Sure, you're going to need other All-Stars, but Rajon can absolutely lead the Celtics back to contention. Monster games like this are all the evidence you need...