What the Hell Happened to...Bill Dinwiddie? 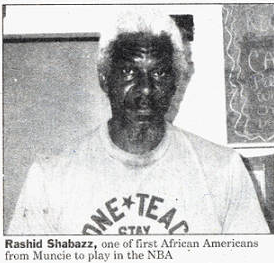 This week in What the Hell Happened To we have quite the interesting figure.  He was a HS teammate of fellow-WTHHT alum Ron Bonham on the powerful Muncie HS basketball team in Indiana.  He's the second WTHHT alum (after Zaid Abdul-Aziz) to change his name, although he did it after his playing career.  If you thought it couldn't get any crazier, the most recent bit of news involves former player Bonzi Wells, who allegedly came to his ex-wife & son's house looking to kill him!  This week we remember Bill Dinwiddie.  Today Bill is known as Rashid K. Shabazz.


Bill was a star player at Muncie HS where he graduated from in 1962.  However with all the accolades that his teammate Bonham received (and deserved), it seems Bill might have been overlooked.  He attended New Mexico Highlands University.  Until researching Bill's life, I most definitely never heard of this college.  It's located in Las Vegas, NM.  However after playing there Bill was not selected in the NBA Draft.  But he also wasn't overly-eager to return to Muncie:

I left Muncie knowing that some black folk were doing something out there and Muncie wasn't teaching it.


When he returned to Muncie from California in the late sixties, Dinwiddie got off a bus only to be picked up as a suspect in an armed robbery.  However he had saved his bus ticket receipt, which he presented to the officers, and was released.  Ironically enough it could be that moment that landed him his NBA career.  The chief of police at the time was friends with the general manager of the Cincinnati Royals.  After speaking with Bill and realizing he was a ball player, he wanted to do him a favor.  In order to make up for the false accusation, he arranged for Bill to meet his friend who ran the Royals.

Apparently this is where Bill got his break.  He must have impressed the guy and wound up making the Royals, who he played for in the 1967-68 season as well as the 68-69 campaign.  He'd miss the 1970 season with a knee injury.  However that next season, Bob Cousy, the new Royals coach, would make his ill-fated comeback at the age of 41.  Red Auerbach demanded compensation.  The trade was officially Bob Cousy (who at the time had been retired for 6 seasons) for Bill Dinwiddie.  Bob for one wasn't happy with having to give up Bill:

I've been out of pro ball for six years now.  Red wasn't being realistic (in demanding compensation.)  I couldn't justify giving up a frontline player.


It's interesting how little information online exists about this deal.  Auerbach is highly regarded for many of the shrewd moves he makes but in acquiring Dinwiddie, no miracles happened. (It should be interesting to see what the pick the Celtics' acquired from the Clippers for Doc Rivers amounts to.  I suppose Dinwiddie will be the barometer?  Stay-tuned.)

Bill played one season with the Celtics, the 1971 campaign.  He appeared in 61 games averaging 12
minutes, 5 points and 3.5 rebounds per game.  After one season with the Celts, Dinwiddie was traded to Milwaukee in October of '71 for a 6th round pick (which would turn in to be Wally Wright, who never made the team.)  Upon trading him at the time head coach Tommy Heinsohn had this to say:

I've yet to figure that man out.  I've watched him for a year and a half and I can't understand why he's never become a good player.


After one season in Milwaukee and 28 more games, Dinwiddie's NBA career was over.

Somewhere after leaving the pros, Dinwiddie made the decision to become a devout Muslim and legally changed his name to Rashid Shabazz.  Folks who know of him speak highly and all indications are that he's very religious.  Rashid is a member the Islamic Center of Muncie.


"It seems to me we should be able to pray together. There is only one God, and we share God," he said. "We're all in this together."


In 2010, Rashid was the Grand Marshall for the Muncie Homecoming Festival parade. Rashid's ex-wife is named Raushanah Shabazz, who was one of the founders of Motivate Our Minds, (MOM).  Their mission statement is to provide premier individualized supplemental education programs for children.  Rashid also is known to go by Rashid "Bill" Shabazz as evident of this obituary.  It appears Rashid's son, Chad Spencer Phelps, sadly passed away in 2012 at the age of 44.

But that's not all the family news.  Most of you probably remember Bonzi Wells, who played for the Blazers (and a few other teams) this past decade.  I always thought Wells was an underrated player despite his label of being cantankerous.  Well how does Bonzi tie in?  First off, he's from Muncie himself and attended the same high school as Rashid.  Rashid's son's name is Rasul Shabazz and an interesting thing allegedly happened at the YMCA in Muncie two years ago.  The whole story is worth a read, and was made evident just two months back in May of this year: 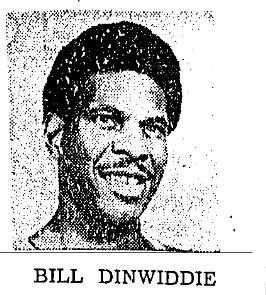 damages in the case.
They allege that Wells — identified by his legal name of Gawen D. Wells — became upset after a disagreement involving his son and Rasul Shabazz, now 39, at the downtown YMCA, where Shabazz then worked, on May 7, 2011.
According to the suit, Wells:
In a Muncie Police Department report, however, Raushanah Shabazz made no mention of Wells having threatened her the afternoon he allegedly kicked in her door. She also acknowledged that she never saw Wells on her porch that day.
Scary stuff indeed, if it is in fact true.  Bonzi always was considered a hothead during his playing days.  What exactly went down for this to take place?  Did Rasul provoke him or is Bonzi certifiably insane?  Only time will tell. (9/13 Addendum: Bonzi explains his side of the story).

Enough about his family.  Rashid, still lives in Muncie, IN today where he owns Rashid's Fish & Chips!  That's right folks, Rashid's Fish & Chips is in the Whitely Community Area of Muncie, IN.  And based on this one review by James H, Rashid's fish is good (despite only giving 2 stars)!  If you're in the Muncie area you can swing by there, the address is 1419 E Highland Ave, Muncie, IN.