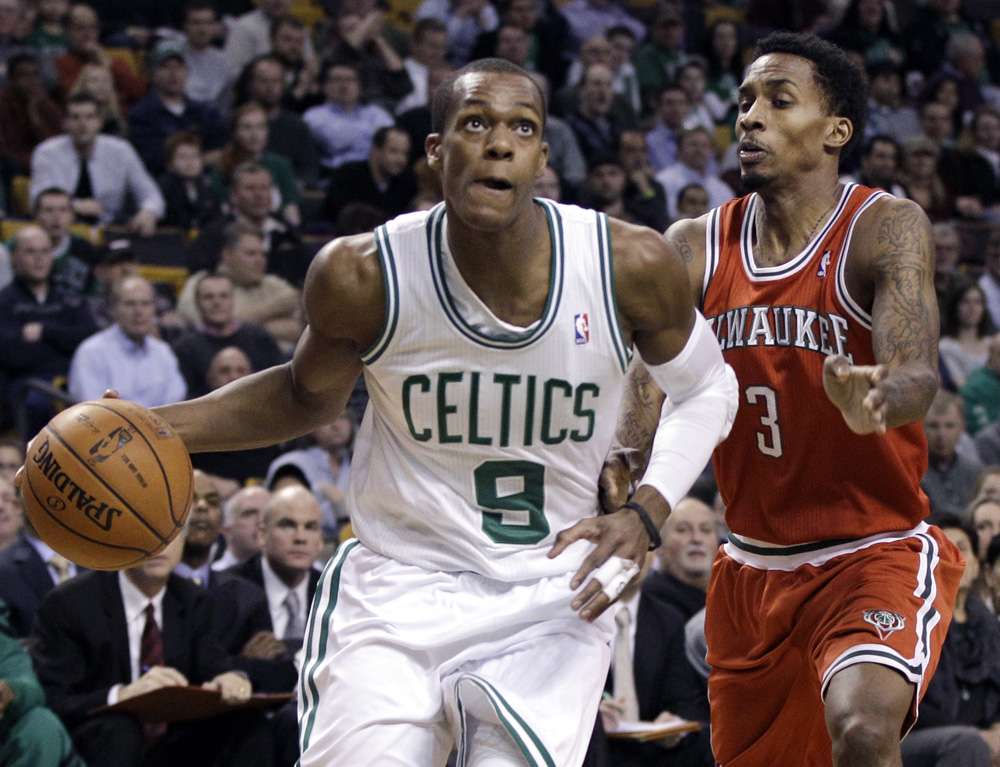 Yesterday, the Pistons signed "point guard" Brandon Jennings to a 3 year, $25 million deal. I put it in quotes because Jennings is a point guard simply by default. In reality he's a ball dominating combo guard that shoots a lot (15.5 FGA per game in his career), but is terribly inefficient (39.4% career FG).

Still, at only 23 years old the Pistons clearly thought he was worth both $8.3M per season and Brandon Knight, who was actually pretty good last year in Detroit.

Now, you may think that this would take Detroit out of the Rajon Rondo sweepstakes, but Vincent Ellis of the Detroit Free Pass says not so fast my friends.

Like I said earlier, move doesn't stop #Pistons from seeking Rondo. More of a matter they couldn't wait around to see what happens there.
— Vincent Ellis (@Vincent_Ellis56) July 31, 2013


So basically the Pistons were at prom, and asked Rondo (the super hot somewhat moody chick) to dance (through his chaperone Danny Ainge), but got a "not right now". They then looked up at the clock and noticed that it was 10:15, and prom ended at 11 and that they said "damn it I'm dancing at this prom" and walked over to Jennings (the pale girl who talks way too much about her sweating problem) and offered him $25 million to dance with them. He (she) said yes. But now Detroit is still holding out hope that they can ditch the overly moist Jennings for the smoking hot Rondo at some point down the line.

Everyone followed that, right?

Back to basketball, and the Pistons potential deal for Rondo. As of now it seems really unlikely that the Pistons would be able to make something happen as it seems very difficult to imagine Rondo and Jennings co-existing on the same team. And Detroit can't trade Jennings until December 15th because of a CBA rule regarding trading recently signed free agents. As we mentioned here, Detroit is also unable to trade a first round pick because they owe a protected pick to the Bobcats to complete the Corey Maggette-Ben Gordon swap from last summer. That means that the Pistons were already in a tough position to make a deal work before acquiring Jennings, and it's now much more difficult.

The only way it seems possible is this:

1. Detroit waits until after December 15th and finds a suitor for Jennings.
2. Rondo is made available by the Celtics
3. Detroit is able to work out a deal for Rondo, WITHOUT trading a first round pick.

#1 is possible, but only if Jennings can improve upon his terrible inefficiency. 39% shooters with crazy high usage rates are not normally considered $8.3M players. #2 is obviously possible, but the Pistons would need to wow the Celtics, which is difficult considering they do not have the ability to trade first round picks. Which leads us to #3, and the only way I can see any of this happening - the Pistons offering Andre Drummond plus an expiring deal (Charlie Villanueva or Rodney Stuckey). Greg Monroe is a very good player, but doesn't have the same value as Drummond, a potentially dominant center who is entering his age 20 season. The Pistons have been steadfast in not making Drummond available at this point, but if Rondo comes back healthy and the Jennings-Smith-Monroe-Drummond mix doesn't work out, Joe Dumars may change his mind. Every move he has made this off-season has been one of a guy fighting for his job, and as good as Drummond may end up being it's extremely unlikely that he will be as valuable as Rondo in 2013-14.

But that all appears to be a conversation for another day. Rondo and Jennings aren't going to play together, so the earliest this could come to fruition is December, and even that seems like a stretch at this time.