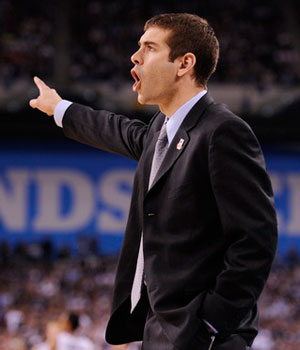 
The Boston Celtics announced today that they have come to an agreement with Brad Stevens to be the 17th head coach of the team. Per team policy, terms of the deal were not announced.

Stevens, age 36, has served for the past six years as the head coach of Butler University, never winning fewer than 22 games and leading the Bulldogs to two national championship games against Duke and Connecticut. He was the youngest coach to reach the Final Four since Bob Knight in 1973.

Brad and I share a lot of the same values," said Celtics President of Basketball Operations Danny Ainge. "Though he is young, I see Brad as a great leader who leads with impeccable character and a strong work ethic. His teams always play hard and execute on both ends of the court. Brad is a coach who has already enjoyed lots of success, and I look forward to working with him towards Banner 18."


It was believed that Danny Ainge would hire a first time NBA head coach, but nobody had Brad Stevens as a possibility. College coaches have generally struggled making the jump to the NBA. The Celtics will likely have several college aged players on their roster the next couple years, so Stevens job will be to develop them. The last time I remember such a drastic change from a high profile coach to a college coach was when the Bulls went from Phil Jackson to Tim Floyd, though Stevens is very highly regarded in the college game. Definitely worth giving Stevens a fair shot here. Maybe he'll surprise us and be the perfect fit for the Celtics.

I love how Danny just said the other day he wasn't even thinking about the hiring process and then all of a sudden he hires someone. Industry rule #4080: Don't believe what GM's say. So about that whole I'm not looking to trade Rondo thing? I wonder how he'll get along with his new coach.

What are your thoughts on Stevens?

Stealthy, but potentially brilliant move by Danny Ainge to hire one of the most sought after college coaches. No one saw this coming.
— Chris Mannix (@ChrisMannixSI) July 3, 2013


Stevens is shrewd hire for rebuilding Celts: Smart, sure and unlike most NCAA coaches who've made leap - understands players are the stars.
— Adrian Wojnarowski (@WojYahooNBA) July 3, 2013