An updated look at the Celtics roster, and why Humphries & Wallace are unlikely to be dealt (for now) 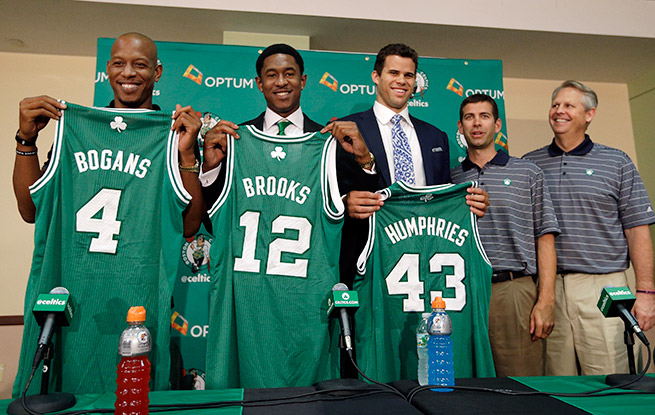 Yesterday was a busy day for the Celtics, as the team introduced three new players (Kris Humphries, Keith Bogans and MarShon Brooks), released one (Kris Joseph), and signed another (Brazilian center Vitor Faverani).

With all of the action, the Celtics official roster is now taking shape. The team now has 16 players with either guaranteed or non-guaranteed deals, plus a 17th in Phil Pressey that is currently in "talks" with the team about a potential deal. Let's take a look at the current edition of the Celtics (ranked by salary).

** = official terms not released, reports Bogans will make just over $5M this season.

15. Shavlik Randolph ($1.1M if option is picked up)
16. Colton Iverson (2nd round pick, not currently under contract but Celtics hold his rights)

The 13 players whom's price tag we know (excluding Faverani) combine for $70.5 million against the cap next season. With the luxury tax set at $71.7M, and Faverani and at least one other player to be added, the Celtics will certainly be looking to trim some money and stay below the tax, which we discussed here.

Of course the easiest way to do that is to make a trade. And after his opening press conference yesterday in which he looked about as enthusiastic as a guy who's dog had just died, most Celtics fans would love nothing more than for that trade to involve Kris Humphries.

However, NBA rules prohibit the Celtics from dealing any of the players they just acquired for at least two months, unless the player is being dealt by himself (as in, you can't combine them with any other players). Here's the rule via CBA expert Larry Coon.

In addition, teams cannot trade players under the following circumstances:

For two months after receiving the player in trade, if the trade aggregates the player's salary with the salaries of other players. However, the team is free to trade the player immediately, either by himself or without aggregating his salary with other salaries. This restriction applies only to teams over the salary cap.

It seems hard to believe that any team would take Wallace or Humphries straight up unless the Celtics were to add several first round picks, something that wouldn't seem to be smart business for a team just beginning a rebuild.

That's why it's extremely unlikely that the C's will deal any of the new guys (Bogans/Brooks/Humphries/Wallace) until at least September 12th, when they can be dealt in any type of deal.

Add it all up and it really seems as if the Celtics could be in for a quiet few months heading into training camp. They're too close to the luxury tax (not to mention their $75.7M hard cap due to acquiring Bogans in a sign-and-trade) to really bring anyone else in without shedding salary, and nearly a third of their roster is currently blocked from being included in most trades.

While a deal involving guys like Brandon Bass and Courtney Lee is possible, it's more likely that Boston will wait until September, and then explore all avenues when it comes to decreasing their salary for 2013-14, without giving up any potential assets.

So as depressed as Hump appeared to be yesterday, look for him to at least spend the rest of the summer as a member of the Boston Celtics. I know, I know — you're all thrilled.