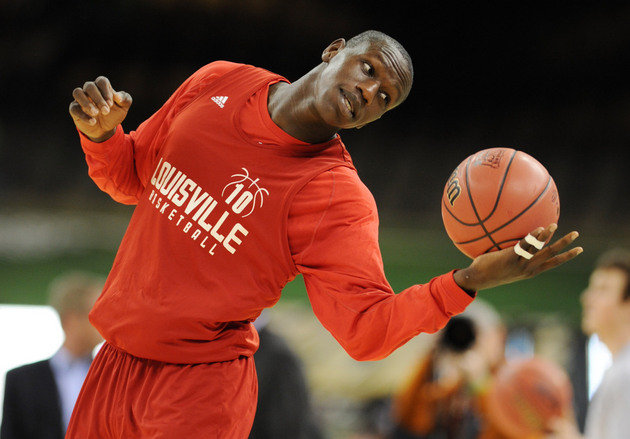 20 days. It seems hard to believe with the NBA Finals just getting underway, but the NBA draft is now less than three weeks away. With the rumors about who the Celtics are interested in drafting with the 16th pick piling up, we've decided to take a closer look at potential future C's in our 'Future is Now' series. We started things off by taking a look at Kansas center Jeff Withey, and today we turn our attention to another collegiate big man, Gorgui Dieng of Louisville.

College Career: Dieng debuted as a Freshman at the advanced age of 20 during the 2010-11 season, and immediately made an impact, averaging 5.7 points, 4.4 boards and 1.9 blocks per game for the Cardinals. However it was Dieng's Sophomore season that put him on NBA scouts' radar as he averaged 9.1 PPG, 9.1 RPG and 3.2 BPG, helping Rick Pitino's squad to the Final Four, and establishing himself as a premier shot blocker. This season, as a Junior, Dieng basically matched his Sophomore campaign, with averages of 9.8 PPG, 9.4 RPG and 2.5 BPG, anchoring a Louisville defense that won the National championship. Dieng played very well in his first 4 tournament games, but struggled once he got to the Final four, being held scoreless against Wichita State, and then putting up 8 points and 8 rebounds in the Final against Michigan. Dieng is forgoing his senior season and entering the draft. 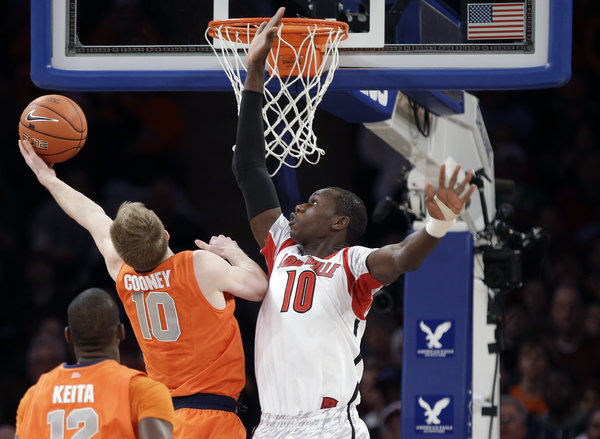 Strengths: Much like Withey, Dieng is a premier shot blocker with impeccable timing and shows signs that he will be able to anchor an NBA defense. His 7'3" wingspan is one of the higher numbers in this years draft class, and he is versatile on defense, chasing opposing bigs out to the three point line when necessary, and proving to be a strong team defender. Offensively he relies on teammates creating his opportunities, but showed consistent improvement during his time at Louisville. According to Draft Express, Dieng converted 66% of his paint opportunities into points last season, up from 59% the year before. Dieng also showed the ability to knock down mid-range jump shots as a Junior, a skill that will be essential to his NBA future. One thing that should get Celtics fans excited is Dieng's rebounding ability. His wingspan and high motor helped him average 10.9 rebounds per 36 minutes last season. He is also relatively new to basketball, so his age (23) is less of a factor than with American born players who are the same age.

Weaknesses: While he continues to improve on the offensive end, he isn't there yet. Not by a long shot. He is a below average free throw shooter (64% during his time at Louisville) and has yet to develop any kind of post game. According to draft express he shot just 28% while posting up last year, an extremely low number. Defensively his biggest weakness is his propensity to pick up fouls. During his college career he averaged one foul every 9.96 minutes, and when you consider NBA players ability to draw fouls, that number is going to get worse. Dieng certainly has more upside than Withey due to his athletic ability and relative newness to basketball, but to become anything more than a backup in the NBA he needs to develop some kind of post game, and stay out of foul trouble.

One thing I love about Dieng on tape is his explosive rebounding ability. He has the rare combination of form (boxing out), explosiveness and size that usually leads to huge rebounding numbers in the NBA. He also shows off his shot blocking instincts around the four minute mark, repeatedly swatting the ball just before it reaches it's apex. Unfortunately the tape also shows Dieng's limitations, namely, his post game. Flash forward to around the 11:30 mark to take a look at some of his moves on the block, and if you close your eyes just a little, you're reminded of Kendrick Perkins. Back up left, back up right, up fake, up fake, ball gets stripped. Clumsy footwork and no go to move is no way to go through life in the post, but as of now, that's exactly the combination Dieng is dealing with.

How he fits the Celtics:

Dieng is the type of rim protecting, aggressive rebounding center that the Celtics have been looking for for a long time. Unfortunately, his offensive ability is far behind the other aspects of his game. However, considering his lack of experience, his ceiling is considerably higher than Withey, and he should absolutely be on the Celtics radar. Two things you can't teach are size and motor, and Dieng has both of them in spades. His ceiling is not as high as Steven Adams at the center position, but if Adams is off the board, Dieng may be the next best center option for Boston. I don't think he's their first choice, but don't be shocked if you see Dieng in green next season.

Height, weight and other measurables courtesy of Draft Express