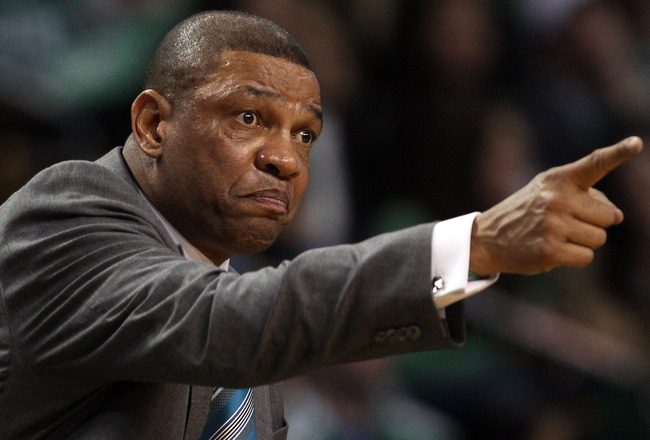 Bombshell from the Herald's Steve Bulpett, one of the foremost Doc insiders on the Celtics beat. Bulpett is saying that with clear interest on both sides, a deal is being discussed that would send Doc to the Clippers, with players being involved. From the article.

With some clear mutual interest having been established, the situation has progressed to the point where the Celtics and Clippers are now engaging in talks involving Doc Rivers and players.
Sources told the Herald today that, while there are still many moving parts in the process, there is now significant impetus from both sides to find common ground.
Beyond finding agreement on players to be included, the likelihood that an agreement can be reached is hindered by the general collective bargaining rules regarding player trades, which can tend to make major moves a difficult needle to thread. The compensation for Rivers would, in a strict sense, be draft picks, but his imprint would be on the player transaction, as well. Put simply, the Celts are said to be seeking a deal the Clippers wouldn’t otherwise consider, except for the fact that Rivers is a de facto part of the equation.

What is abundantly clear is that the Celtics are using Rivers as an asset and would be hesitant to let him go for less than what they consider market value. He still has three years remaining on his contract and, thus, cannot during that time coach a team other than the Celts without their consent -- which amounts to another club paying ransom.
The Celtics' preference has been to keep Rivers in the fold, and there was frankly some uneasiness within the organization when he opened the door to a departure following the team's elimination from the playoffs. But now that the Celts know Rivers has changed his stance on wanting to be with them for the long haul in the vein of Jerry Sloan and Gregg Popovich (a reference he raised), they are examining their options in the marketplace.


Of course, this is still in the early stages, but you'd have to imagine that several assets are coming from LA (Bledsoe, Jordan and possibly a pick) and that at least KG would be moved West. Player salaries must be matched, so the Celtics could not just ship Doc out to Los Angeles for Bledsoe and/or Jordan.

Bulpett's source indicates that while Doc is set to leave, he does want to make sure the deal benefits the Celtics, as he is wary that leaving during a rebuild looks bad.

According to a source close to Rivers, the coach wants to make sure the Celtics emerge from the deal in a better position to transition from the Paul Pierce-Garnett era.
"Doc wants this to be a win-win," he said. "He still feels very strongly about the Celtics and Danny (Ainge, the club's president of basketball operations).
"If (the Celtics) can’t work things out with the Clippers, then Doc would have no problem going back and coaching. He just wants to make sure that if he does go, the Celtics come out of it stronger."


Crazy how this has developed, but at this stage, it seems Doc is all but gone to LA. He has abandoned the "Jerry Sloan of the Celtics" goal he had just two years ago, and now appears to be heading West.

While I'll always respect Doc for what he accomplished here, this stings. He was supposed to be here for the long haul; the 5 year, $35 million deal signified that. Instead, at the first signs of a rebuild, he's off to ring chase. Rivers was heading towards a Hall of Fame career as Celtics coach, but instead will probably be remembered more like Ray Allen; a great member of the organization that left under dubious circumstances.

With that said, if the Celtics can pry Bledsoe, Jordan and a 1st from LA, Boston's rebuild effort will have just gotten a little easier. But at the steep price of Rivers and KG, that will be of little consolation to many fans.

More on this to come as it develops.

UPDATE: AND more just developed, if Doc heads West..KG is willing to go with him. From Adrian Wojnarowski. Shit is getting really folks, quite quite real.


The Boston Celtics are deep in discussions with the Los Angeles Clippers on a blockbuster deal to send coach Doc Rivers and Kevin Garnett to Los Angeles, league sources told Yahoo! Sports.
The final hurdle of a deal centers on the Clippers' willingness to include guard Eric Bledsoe into a trade package with Boston, sources said.

Boston and Los Angeles are discussing a package that will send DeAndre Jordan and two first-round picks to the Celtics for Garnett and the right to hire Rivers as coach, sources said.
Garnett will waive his no-trade clause to go to the Clippers, where he'll be reunited with Rivers. Celtics assistant Ty Lue also will likely join them in Los Angeles, sources told Yahoo! Sports.
Clippers owner Donald Sterling is prepared to pay Rivers in the neighborhood of the $7 million annual salary he currently holds with the Celtics, front office sources said.