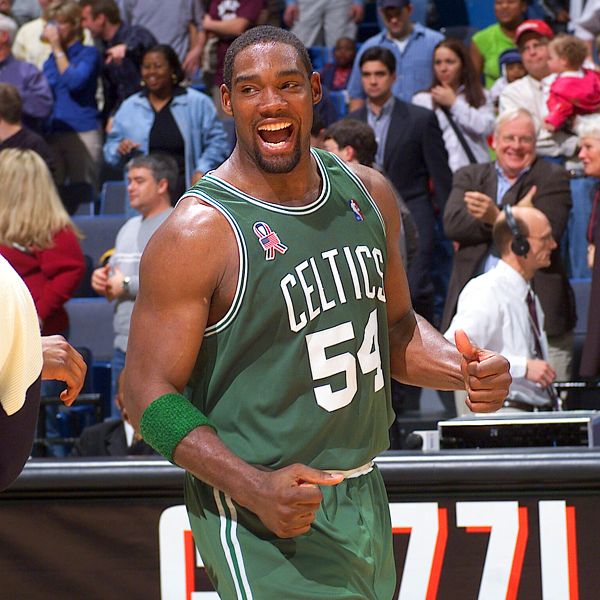 Sometimes I think back to that celebration on June 17, 2008.  The little green and gold and black confetti falling on the Garden floor.  I see an elated Kevin Garnett bellowing "Anything Is Possible."  I see an almost-childlike Ray Allen gleefully skipping across the parquet.  I see Glen Davis and Leon Powe and Paul Pierce huddled up yelling "Hoo-rah, Celtics, Ubuntu!"  And then in my mind's eye I see #54, re-assuring half-smile, celebrating along with the rest of the team, finally on top of the basketball world.

Of course Rodney Rogers wasn't there in 2008.  But there was a part of me that wished he was.

He helped an unheralded Celtics' team come within 2 games of the 2002 NBA Finals.  If you never saw him play you might think he was built more like a football player.  But then he'd surprise you with that deft touch from deep.  He played minutes at the 4 and 5 on that Celtics' team and really gave them a veteran-leadership voice in the locker room.

Rodney endured a rough childhood and became a McDonald's All American out of Hillside High School in Durham, NC.  He'd stay close to home and attend Wake Forest University, teaming with Randolph Childress but missing Tim Duncan by a year, when he decided to leave college early for the NBA draft.  He was the 9th overall pick in the 1993 draft by the Nuggets.

Today was 11 years ago Rodney Rogers played his last game for the Celtics.  May 31, 2002, a disheartening loss to the Nets which knocked the Celtics out of the playoffs.  After the game I knew Rogers was a free agent and hoped he'd return.  He never did.

If you don't remember just how terrific Rodney Rogers was, take 30 seconds to remind yourself with one of the truly spectacular moments in any NBA game ever:

[Tangent time: people always forget this Rogers moment and I remember it didn't even get nominated for the ESPY that year.  After his 3rd three pointer in less than 9 seconds, the Jazz pushed the ball down and Jeff Hornacek knocked down a shot from the corner, allowing the Jazz to hang on.  Had the Nuggets won that game, it would've been even more unforgettable]. 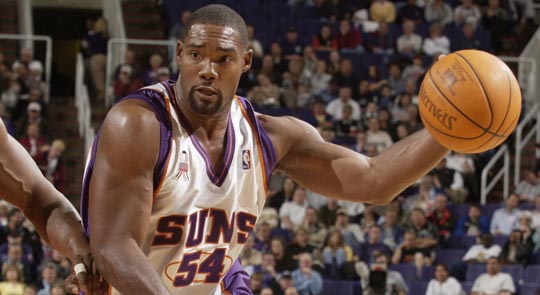 Despite his intimidating appearance by all accounts Rodney was always a terrific and humble guy.  The Celtics acquired him and Tony Delk for Joe Johnson during February of 2002.  Rogers and Delk would help catapult that Celtics into the Eastern Conference Finals, for the first time in 14 years.  But Rodney left the Celtics to sign with the Nets in the summer of 2002 and would be part of the Nets team that made the Finals in 2003.  Rodney's NBA career ended after the 2005 season with the Hornets.  Late that year, his new life was beginning. He met Faye. They were engaged in April 2008, seven months before the accident. 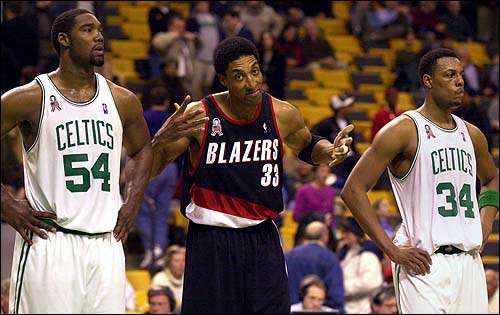 Ah yes the accident.  WTHHT is a special sanctuary, where sometimes, it's best that certain things aren't spoken of.  If you read Vin Baker's, you'll know it didn't touch on alcohol.  If you read Kermit Washington's, you might have been surprised to not see the "punch" mentioned.  But I'd be remiss not to mention what happened to Rodney because of what he strives to accomplish today.

On November 28, 2008 Rodney rode his dirt bike at a high speed into a curve in North Carolina. The accident left him with a broken neck.  Doctors don't believe he'll ever be able to walk again.


“I remember I didn’t want to leave the house,” Rogers said. “She (Faye) grabbed me and told me I had to make the best of it and get out the message of my life.  Some days are good, some days are not good, but I survived and I feel blessed. I can’t keep going around being all sad and depressed. I’ve got a loving wife I thank for that.


“She has never complained. She’s been there every step of the way, and I love her to death,” Rogers added.

With annual medical expenses hovering around $400,000, Rodney is relegated to a wheelchair that cost nearly $90,000. He is on a ventilator and also requires the full-time assistance of two nurses.  He can't move his hands or legs or feet.

What Rodney aspires for now is to spread hope.  Chris Webber had this moving interview with Rodney recently:

You can learn more about the Rodney Rogers Foundation and even donate to their cause.  Their motto is heartwarming:


Thanks to people like you who share our vision of a world without paralysis, we’ve made huge discoveries in finding new and better ways to help those living with paralysis and their families cope with everyday life. We now know so much more about the paralysis and what it takes to help those patients live a healthy life . And we work day-in and day-out in communities throughout the world to ensure everyone can access quality care and these new advances. But the fact is, paralysis is still life-threatening, and until we can keep people from dying from it, we need your help - your generosity is crucial as we continue this fight.

By making a donation today, you can help make a difference.

If you've ever crossed paths with someone impacted by something so unfortunate you know how much it affects their everyday lives.  Things me and you take for granted are incredibly challenging for that individual.  It hurts so very much to see this have happened to a guy I grew up really rooting for.  I always wanted him to be a Celtic and to win a title.  He became a Celtic and missed that title by 6 seasons.  But in my heart, he'll always be a champion.  God bless Rodney and good luck from all your Celtics fans.