Unfortunately for Boston, Jason Terry has no plans to retire 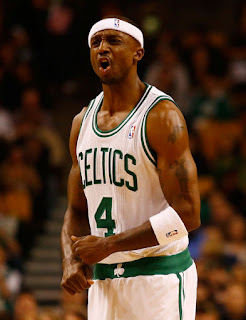 Jason Terry says he has no plans to retire, so the Celtics may be stuck with him.

That may sound harsh, but Terry is coming off the worst season of his career since his rookie year. He's 35 years old and has two years left on his contract. Terry was signed to the mid-level exception last summer and is owed almost $11 million total.

There isn't a huge market for slumping players on the wrong side of 35 making that kind of money. The Celtics are already in a tough financial situation, and paying an aging shooter over $5 million a year certainly doesn't help. So, if Boston wanted to cut ties with Terry, it would have to be by trade and they would have to do it for pennies on the dollar, since he has no plans of hanging up the high tops.

From the Boston Globe:

I definitely don’t want to retire,” Terry said after the Celtics’ 88-80 season-ending loss to the Knicks at TD Garden Friday night. “I've got a lot of basketball left in me.”

The Celtics can simply call it an off year for Terry and hope for better results next season or try to change their play style to get him more comfortable. Either of those scenarios is far from ideal because you don't see many players in their mid-30s have a resurgance and changing the play style is going to be difficult once Rajon Rondo comes back.

Rondo needs the ball in his hands and so does Terry. One would have thought when Rondo went down, Terry would have stepped up his game. He did not. Before Rondo suffered his season-ending knee injury, Terry was averaging around 9.5 ppg and after Rondo got hurt, Terry averaged around 10 ppg in the regular season.

Terry simply looked lost most of the year and there were countless times you would forget he was even in the game.

This seemed like a great signing last summer, Terry was one of the best players on a championship Dallas Mavericks team two seasons previous and a more than suitable replacement for Ray Allen. If Paul Pierce and Kevin Garnett are not with the Celtics next year, Terry would more than likely request a trade to a contender with no hard feelings on either side.

There's still a chance Terry can redeem himself and be the sixth-man of the year-type player he's known for, but if not, fans are going to wish Danny Ainge had let the JET land somewhere else.