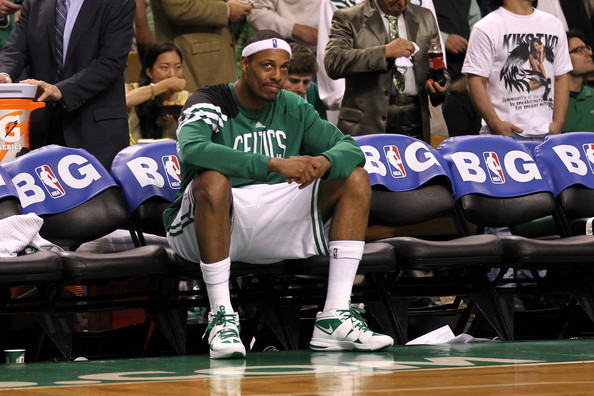 Over the weekend the Ohio News-Herald ran a story saying "sources indicate Celtics director of basketball operations Danny Ainge will likely buy out forward Paul Pierce's $15 million contract for next year ($5 million is guaranteed)."  That was enough to get the rumor mill churning, as NESN, Yahoo!, and CBS Sports were among the many to take the story and run with it.

On Monday Bill Simmons sent out a series of tweets about why it won't happen (here they are: one, two, three, and four), and CSNNE's Rich Levine gave a good take on the situation:


But for it’s worth, I spoke with a team source this weekend who immediately laughed off this report. The funny part wasn’t the idea that the Celtics will buy out Pierce, because, as we know, that’s obviously within the realm of possibility. The joke was the suggestion that the C’s are “likely” to do anything at this point in time. The truth is (now this is me talking) that the Celtics will deal with Pierce the same way they deal with everything: By exploring every option. And right now, with a full month before we even get to the draft, the exploration is far from over. It would be crazy for the Celtics to look at the current state of things and just shrug their shoulders like: “OK, well I guess we’ll probably just buy him out.”


This season isn't even over yet.  At the moment there are some teams that haven't given a single thought to next year.  As Simmons' tweets say, Pierce has trade value.  So on the chance that Boston might want to buy out his contract for $5 million, why wouldn't they at least try to trade him first?  That can't happen until the season ends.  And once the draft has taken place (June 27th) the market landscape may shift and present new opportunities.  Even if the C's do end up deciding to buy out Pierce's contract, it won't be until just before the June 30th deadline.