Paul Pierce and Kevin Garnett to sit vs Heat on Friday 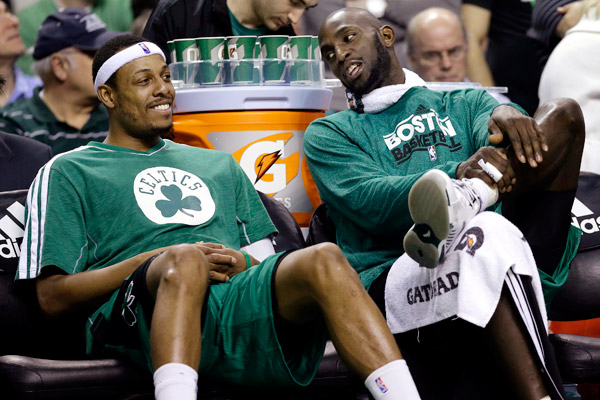 
Paul Pierce & KG are traveling with the Celtics to Miami but neither will play against the Heat due to sore left ankles. Both are day-to-day
— Boston Celtics (@celtics) April 11, 2013


Sore left ankles, huh?  It's very convenient their "injuries" are identical and can both fit in one tweet.  The fact that Pierce and Garnett are making the trip to Florida makes it seem quite likely the two of them will be "feeling better" on Saturday, and play against Orlando.

With 5 games to go Boston is all but locked into the 7th seed in the East (they trail Atlanta by 2.5 games, and are 3 up on Milwaukee), so it comes as no surprise that Doc plans to give the veteran stars a day off.

There's a fairly good chance Miami might do the same thing, as none of the Heat's "Big 3" played last night.  Chris Bosh has "flu-like symptoms," Dwayne Wade's got "knee and ankle injuries," and LeBron is recovering from a "sore hamstring."  Man, these late season injuries are rough...