Nets coach P.J. Carlesimo has come around on Jeff Green 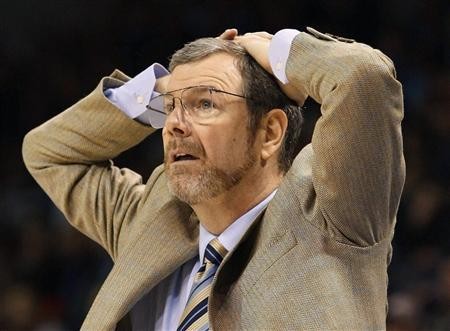 Jeff Green has been polarizing player for many Celtics fans. Some love him; love the potential, and the flashes of greatness. Some hate him simply because he was the piece we got back for Perkins, and others can’t stand him, think he’s overrated, not that good etc. Coming out of college he was hearing much of the same stuff, even from the NBA coaching circle. Before last night’s game, Nets coach P.J. Carlesimo reminisced about his initial thoughts on Green’s talents, saying:


“I thought, honestly, coming out of Georgetown, he was not a very good player,” the Nets coach said before the game.

“But his rookie year, he got excellent coaching, and ever since then he’s really taken off.”

If anyone remembers back, Carlesimo was the coach of the Seattle Sonics during Jeff’s rookie season in 2007-08. Besides P.J.’S initial opinion (who knows if it was serious or it was just some light hearted ribbing) and tooting his own horn, he had some great things to say about our Iron Man:


“He’s one of my favorite guys I’ve ever coached,” Carlesimo said. “He’s just a first-class individual and it’s really good to see someone come back from the challenges that he had to come back from.”

And come back he did, in Jeff’s last 12 games he’s averaging 20.6 points per on 56% shooting. He really came into his own since Rondo got injured, it seems like his potential and abilities are finally coming together to show the player he’ll become. I was a big Jeff Green critic coming into this year and pretty much up until he put on his Iron Man suit, but he’s won me over just like he did Coach Carlesimo.