Former Celtic Jason Collins comes out of the closet as gay 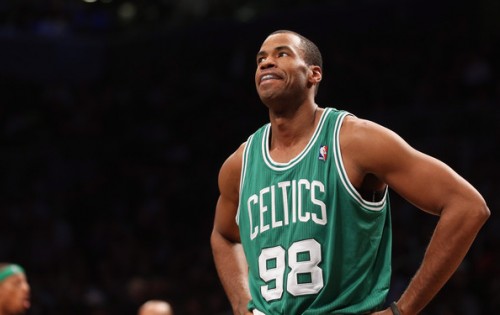 Jason Collins was with the Celtics just a few months ago before he was traded to the Wizards in the Jordan Crawford deal.

He hasn't been in the news since. Until now.

Collins comes out in Sports Illustrated, and writes:

I didn't set out to be the first openly gay athlete playing in a major American team sport. But since I am, I'm happy to start the conversation. I wish I wasn't the kid in the classroom raising his hand and saying, "I'm different." If I had my way, someone else would have already done this. Nobody has, which is why I'm raising my hand.

Huge props to Jason Collins for being brave enough to share his story. Especially at a time when he is a free-agent, still looking to play for a team.

While Collins might not be the most active of active players since he's a free-agent, this has to be the hugest coming out by a non-retired athlete in pro sports history, at least the NBA's. Usually players will come out many years after the fact, once they've been forgotten. Collins has now been thrust into the limelight and might pave the way for more athletes to come out as gay.

The topic of gay players in professional sports is something we've been following heavily over at Patriots Life as two NFL players, Brendon Ayanbadejo and Chris Kluwe have been active in supporting gay rights. Ayanbadejo recently claimed that as many as four players in the NFL could come out as gay this year. The step that Collins just took could make that a reality even sooner.

Collins has some recent roots in Boston, obviously. He was even a starter for a good stretch - much to the chagrin of Celtics fans. The recent bombing at the Boston Marathon, just blocks away from where he used to live, shook Collins deeply. It was enough to finally push him into taking this step.

"The recent Boston Marathon bombing reinforced the notion that I shouldn't wait for the circumstances of my coming out to be perfect," Collins writes. "Things can change in an instant, so why not live truthfully?"

Collins was greatly respected by his teammates and coaches during that stint in Boston. Celtics coach Doc Rivers in particular had nothing but good things to say about Collins, recently calling him, "literally...one of the best guys I’ve ever had in the locker room, player or coach.” (via CelticsHub)

There weren't many hints of Collins' sexual orientation while he was in a Celtics uniform. But Collins does reveal there was one right in front of our noses. That number 98 wasn't on his chest just because the Celtics have retired almost all the other ones. That number had a deeper significance to Collins (and the entire gay community) than we realized.

My one small gesture of solidarity was to wear jersey number 98 with the Celtics and then the Wizards. The number has great significance to the gay community. One of the most notorious antigay hate crimes occurred in 1998. Matthew Shepard, a University of Wyoming student, was kidnapped, tortured and lashed to a prairie fence. He died five days after he was finally found. That same year the Trevor Project was founded. This amazing organization provides crisis intervention and suicide prevention to kids struggling with their sexual identity. Trust me, I know that struggle. I've struggled with some insane logic. When I put on my jersey I was making a statement to myself, my family and my friends.

This decision could cause a ripple effect across the sports world and could, hopefully, go a long way for equality.

David Stern on Jason Collins: "We are proud he has assumed the leadership mantle on this very important issue."
— Baxter Holmes (@BaxterHolmes) April 29, 2013

Proud of @jasoncollins34. Don't suffocate who u r because of the ignorance of others #courage #support #mambaarmystandup #BYOU
— Kobe Bryant (@kobebryant) April 29, 2013

By @jasoncollins34 opening doors & doing it his way on his time he has helped shape a more accepting America. May many more follow #courage