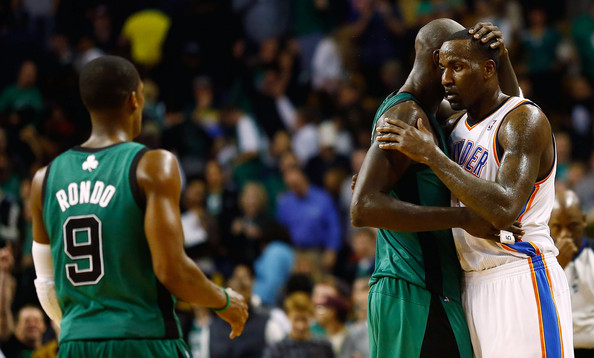 Kendrick Perkins could be back in green next year.

The Boston Globe's Gary Washburn was on 98.5 The Sports Hub's Toucher and Rich today (via @CelticsTown and CBSBoston) talking about how there are rumors circulating that the former Celtics big man could be amnestied by the Oklahoma City Thunder after this season ends.

His contract is kind of an anchor at this point. He has not been statistically productive for the Thunder; the leadership is there but if you look at the numbers its nothing close to what he did in Boston. So I do think it’s a possibility,” said Washburn. “There are still some strong feelings for him in Boston.”

Perkins getting amnested has been debated ever since the clause, where teams were allowed to cut one contract signed before the lockout and it wouldn't impact their salary cap, was put into last year's collective bargaining agreement
While getting Perkins back would help cool some of the fans that were flabergasted that Danny Ainge traded him away at the deadline two years ago, it does raise some questions if the deal were to go down.

Right now, Kevin Garnett is the team's center, more out of necessity than desire, and one would have to think that with Perkins back in the fold Garnett could move to his more comfortable position of power forward. But not so fast. Before he went down with season-ending back surgery, Jared Sullinger was showing that he is a legit NBA player in his rookie season and should only get better the more he plays, assuming he comes back healthy.

Starting Perkins and Garnett would relegate Sullinger to the bench, presummably until Garnett retires. It would stifle his growth for a couple years, and while he would still get minutes, he would be fighting for court time with Brandon Bass. Yes, Bass has seen a decreased role recently, but the guy is still owed over $13M total in the next two years so he has to play. Ainge could trade Bass, but it won't be for anything of value as the guy has taken a serious step back this year.

Would Perkins be open to coming off the bench? That would be a serious hit to his career as he is quickly approaching 30 years old, but if Sullinger and Garnett up front give the team the best chance to win, that's who you start.

At the time, tons of fans and analysts were smashing the Celtics for essentially throwing away their title hopes that year by trading away Perkins for a possible replacement for Paul Pierce and Ainge crossing his fingers that he could get something productive out of the flying O'Neal brothers (Shaq and Jermaine).

That makes sense, but it also made basketball sense to send Perkins packing. Perkins was offered a four-year $22M contract extension from the Celtics. It's obvious he was not going to re-up with Boston since he signed a four-year $34.8M deal with OKC. That's a big difference in price totals. So, since Perkins was gone at the end of the year anyway, why not get something for him to build on for the future?

Green has had his ups and downs with Boston. He didn't click with the rest of the team when he first arrived, had to have heart surgery and missed all of last year and is just now rounding into form. Sure, the Celtics "could" have won a title in 2011, but it wasn't guaranteed and ask yourself, which player would you want on your team right now and going forward?

For the Thunder, this deal (and subsequent contract extension) looks like a rare Sam Presti mistake. Perkins has averaged 4.9 points, 6.8 rebounds and just over a block a game in 25.6 minutes per game for Oklahoma City. For a guy making around $8.5M per year and still owed around $18M over the next two years, those are horrible numbers.

The issues on the court for Perkins are the same as they were in Boston: he gets hurt and can't play in the fourth quarter because he's a liability on offense. He certainly didn't help Oklahoma City beat Miami in the finals last year, a team everyone said had to be beaten by size.

Would Perkins want to play in Boston again?

If Perkins is cut loose by the Thunder, then the Celtics should snag him up for pretty cheap since he's still going to earn the rest of his contract. But can they? The core of Perkins buddies are still in Beantown, including one of his best friends Rajon Rondo, so chemistry isn't the problem. It's Danny Ainge. The Perkins/Green trade took everyone, including the players, by surprise. Could Perkins trust Ainge to not ship him off again if the right deal comes up? If, in Boston, Perkins starts to become one of the best defensive centers in the game again, it only makes sense that teams would come calling.

Getting Perkins back would be a serious help to Celtics' lethargic frontcourt, but the move is not without its issues.