Kobe Bryant reminisces about his workout with the Celtics 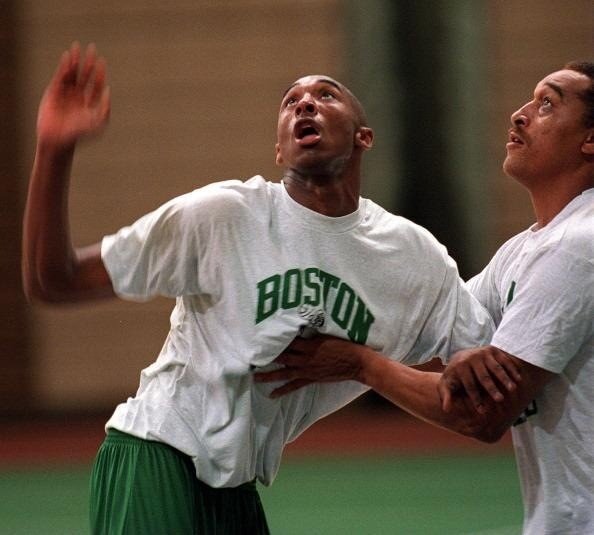 I guess Kobe Bryant is feeling nostalgic as he's in the twilight of his career. Today he tweeted a picture we posted on this site a year ago (See more pics here). It's from his pre-draft workout back in 1996 with the Boston Celtics. The Celtics GM at the time, M.L. Carr, was very high on Kobe, but then M.L. traded up to the 6th pick (in what was unanimously considered a 6 player draft) and drafted Antoine Walker. At the time it was unheard of to draft a high school guard high in the draft. The Charlotte Hornets would go on to draft Kobe in a prearranged deal in the teens and trade him the the Los Angeles Lakers for Vlade Divac.

In addition to getting to move up in the draft, M.L. Carr also secured an additional very valuable lottery pick from the Mavs in the following Tim Duncan draft (all for just Eric Montross). With two high lottery picks the Celtics still struck out in the Duncan sweepstakes and settled for Chauncey Billups and Ron Mercer. I was actually just talking to TB about this the other day. How M.L Carr almost gave the Celtics Kobe and Duncan. I'm pretty sure that tandem would have beaten the Lakers Shaq/Eddie Jones one in the early 2000's. If the Celtics had gotten Duncan they probably don't draft high enough to take Pierce, but if they had drafted Kobe, they most likely are still able to draft Pierce as Antoine Walker was just as good a player as Kobe during their first few years. Lots of what ifs.

The Kobe well is kind of poisoned in most Celtics fans' heads, but does anyone really wish the Celtics would have had Kobe these past 17 years?

Imagine that! My pre draft workout with the C's 1996 with the late Dennis Johnson #countonhistory twitter.com/kobebryant/sta…
— Kobe Bryant (@kobebryant) February 6, 2013