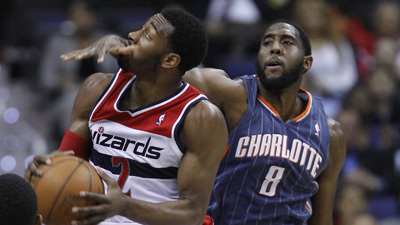 Many Celtics fans have been wondering whether newly-signed big DJ White will be available for tonight's game against the Portland Trailblazers.

According to the Boston Herald's Steve Bulpett, White is in Portland with the team, but is currently unable to talk to the media until his paperwork goes through. CSNNE's Sherrod Blakely confirmed that White's paperwork from China has yet to arrive.

It is unclear whether White's paperwork will arrive in time for him to play tonight or not, but it currently hasn't gone through. Stay posted to CelticsLife.com for updates.

Celts PR says DJ White is here in Portland at shootaround, but unavailable to media until his paperwork goes through.
— Steve Bulpett (@SteveBHoop) February 24, 2013

#celticstalk: D.J White is with the #Celtics here in Portland, but his clearance paperwork from China has yet to arrive.


In other news, Kevin Garnett will suit up tonight after resting during Friday's game against Phoenix:

KG rested and ready to go vs Blazers tonight. Says he hated missing a game, but knew it was necessary.
— Steve Bulpett (@SteveBHoop) February 24, 2013