The Wonderful Simplicity of Courtney Lee 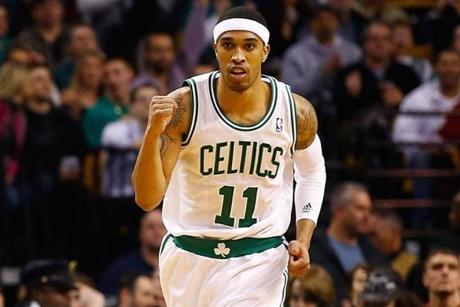 Courtney Lee has all the makings of your average player. He has never had a PER over 13 (League-average is around 15). He has hovered around league-average efficiency throughout his entire career. He always had a rep of a very good defender, but certain stat heads said he was merely average. All of these things may or may not be true. But one thing is for certain. I love him on this team.

I first learned about Lee when he came to New Jersey. He played there for a season, and took the most shots per game in his career (10.9). He also shot a career-worst percentage from 3-point territory (.338%). He was unable to be successful due to how awful his teammates were and how much attention he received because of it. Lee's best year was actually his rookie season with Orlando and it is pretty obvious why. Dwight Howard and an underrated supporting cast helped take pressure off of him. That is why the fit seemed so perfect with Boston this year. He would be, at best, the 5th option on this team. But not everything works out so well.

Lee had a terrible first month with the Celtics. He made little impact other than some decent defense, and he shot a putrid .182% from 3-point land. It seems like he could not play his game in the starting lineup. He started playing better in December, after he lost his starting job to Jason Terry. But once Avery Bradley came back, and Terry returned to the bench, Lee really exploded. With Terry taking the majority of minutes as backup shooting guard, Doc had to become more clever with Lee's minute-distribution and his role. And so far, it has worked.

Role players are simplistic in nature. They can only do a couple things well. We were lucky to grab a guy like Lee, who actually has a wider array of skills than one would guess. His defensive abilities and good 3-point shooting were obvious. But he has shown an ability to handle the ball and make plays for others. He can step in and hit the mid-range shot. He can drive to the rim and finish well. There is a little more to Lee than meets the eye, but in the end he is a "3 and D" guy. And that is great.

The winning formula with Lee seems obvious now. When Rondo is resting, stick him at point guard and give him basic autonomy. When he is on the floor as a shooting guard, stick him in the corner and get him the ball in transition. If you keep him somewhat involved on offense by giving him the ball, he will knock down the open shots he gets. We did not exactly do this early on in the season, due to the constant shifting of roles and poor play in general. With Avery back, and Lee's role firmly established, Courtney has played very well.

Fitting Lee into this team may have seemed difficult. But all it really took was moving him to the bench and putting less pressure on him. The formula we are currently applying to him right now has him shooting 57% from 3-point territory. Obviously he will not keep it up, but it just shows how much he can help us down the line. Players who have all sorts of gadgets to them but need special attention to fit may seem nice and all, but the benefit of simple players cannot be ignored.