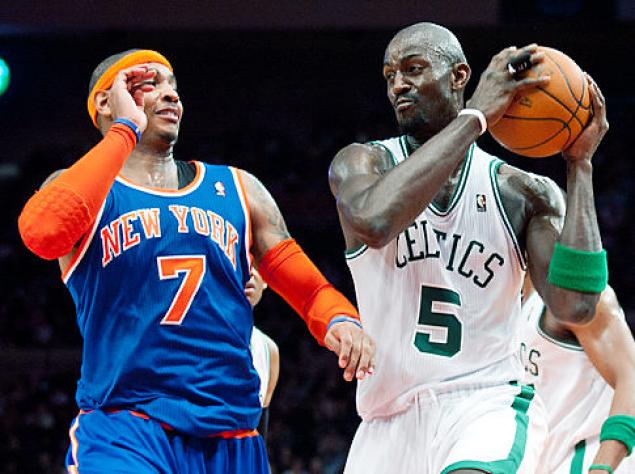 Reports from the Knicks post game show that Carmelo went back towards the Celts locker room, presumably to look for KG. Tweets are what we have right now, but we'll keep you posted as this develops.

Carmelo exits via the opposite tunnel to avoid walking past the Celtics...or maybe he was waiting for Kevin Garnett.
— Frank Isola (@FisolaNYDN) January 8, 2013

MSG is reporting that Carmelo Anthony went straight to the Celtics locker room yelling after the game, had to be held back by teammates.
— Legion Sports (@MySportsLegion) January 8, 2013

I also pretty distinctly heard Melo yell something along the lines of 'I'll find you after the game' to Garnett as the clock was running out.

We get it Carmelo, you shot 6-25 and lost to the C's sans Rondo. But show a little class would you?

Edit: Video of KG/Melo going at it late in the 4th, Melo drops a F*CK YOU P***Y. Stuff like this happens in every game, but not surprising this carried over into the post-game with the amount of bumping/yelling the two were doing.

Edit 2: Carmelo waited by the C's bus after the game. This keeps getting better.