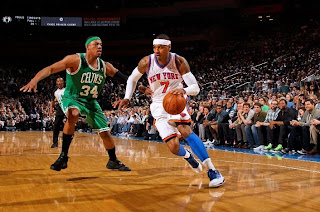 In the middle of a battle with the Atlantic Division-leading New York Knicks, no Rajon Rondo was the last thing on the Boston Celtics' minds.

The Celtics manned up in the absence of their star point guard and took things to the New York Knicks Monday night, winning their third-straight 102-96.

Boston held Carmelo Anthony to his worst game of the season, as the Knicks' star needed 25 shots to score 20 points, shooting 25 percent from the field.

With Rondo serving a one-game suspension, different players had to step up. Avery Bradley man-handled any defensive assignment he saw and chipped in 13 points and five assists on 6-of-11 shooting. Jeff Green finally woke up and posted 16 points and six rebounds off the bench. Jared Sullinger had 10 points and five boards, while finishing with a game-high +9.

Without their assist-generating machine running the offense, the Celtics still managed 26 dimes on 39 made baskets.

They kept it close throughout, and used an outstanding third quarter to overcome the Knicks and pull away a little bit. The third frame has been great to Boston over the past three games.

With 45 seconds remaining, Paul Pierce did what Paul Pierce does at Madison Square Garden. The Celtics' captain hit a dagger jumper to give Boston a 100-94 lead. From there the game petered out to a close with some Garnett free-throws

This game offered pretty much everything you could ask for out of a divisional game. Well, outside of Rajon Rondo and Raymond Felton. Things got chippy between just about everyone on the court, and no Celtics backed down. Especially of note was Sullinger, who stood in there through everything. He did his job and more tonight and showed the poise of a player who has far more than just 33 games on his resume.

If Indiana was a fluke and Atlanta was a reminder, this game was a warning. The Celtics let everyone know what they are indeed capable of, even if they don't show it all that often.

The Celtics, now 17-17, have Tuesday off before returning to the Garden Wednesday night to face the Phoenix Suns. New York falls to 23-11 and has to deal with a trip to Indiana on Thursday.