My Reaction to Overreaction

Ray Allen signs with Heat: "Ray left? Our season is over!"
Courtney Lee signs with Boston: "We got Courtney Lee? Forget Ray we're so much better now!" 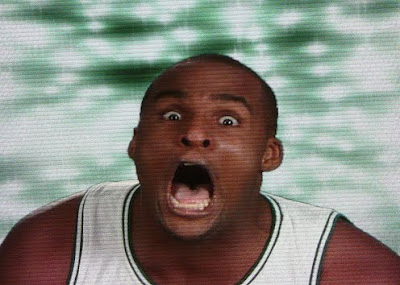 Celtics Draft Fab Melo: "What the fuck Ainge?!? Why didn't you get Perry Jones III, you disgrace of a GM?"

Pre-Season: "The Celtics are gonna blow people out every night this season!"
At 14-17: "Blow this garbage up!"

Rondo has a triple double: "Most underrated player in the league! BY FAR the best point guard in the league."
Rondo gets suspended: "He just isn't a franchise player. Doesn't score enough, and can't even be trusted to play. TRADE HIM."

Pre-Season: We have 2 6th-Man of the Year winners! Best bench in the NBA coming right up.
Most of the season: "Danny Ainge utterly failed this off-season. Our bench is still horrible year after year, he hasn't made a good move since trading for KG."
Last night: "OH MY GOD! Our bench is ridiculous!"

KG and The Truth have off nights (At any point in the last 3-4 years: "I hate to say it, but Garnett and Pierce just don't cut it anymore. We stretched the Big 3 Era out past expectations, but it's over now.
KG and The Truth have vintage games: "Garnett is still the best big man in the league, Pierce makes Carmelo look like Metta World Peace."

Fab Melo has a D-League triple-double with 14 blocks: "Danny Ainge is a genius, this Flabby Melo can save our season!"
Fab Melo has a concussion walking into a door: "He clearly isn't built to be an NBA player, just too much of a liability.

Pre-Season: "Darko is finally going to turn the corner and lead us to Banner 18!"
Now: "Ummm, about that..."

These are just some of the more memorable overreactions among a myriad from Celtics fans and the general sporting world (post your own in the comments!).  In almost every case, reality is lodged somewhere in the middle, far between the polarizing narratives that dominate headlines. There are 82 games in an NBA season. While you can certainly notice encouraging or frightening trends through a multi-game stretch, we should all be extremely careful about our calls to "blow it up", just as we should not dub the C's a championship team every time they go on a winning-streak.

While the emotional heights of the game are what make most of us such passionate fans, we have to understand that they can be very misleading. Statistics can be just as misleading if we don't really delve into the meaning. Again, Jeff Green is always the best example because for some reason he's either Jesus or Satan in most people's minds. When he goes 3-8 with 1 rebound he's blasted for being a poor shooter with no rebounding ability. When he goes 5-10 with 5 rebounds he's suddenly "proven the haters wrong". The reality is that these stat-lines aren't that far apart, especially when factoring in minutes, what position he played, competition, etc (for the record, Uncle Jeff's rebounding rate of 8.1, which definitely needs work, is still higher than PP's '09-'10 rate of 7.9, even though that was essentially a non-story).

This is not all the media's fault or all the fans'. Magazines and websites create their strategies based on what people will read, watch, and BUY. So while Skip Bayless and Stephen A. Smith essentially discuss nothing of actual consequence, most people would prefer their arguments over who is clutch and who wants it more than to watch a Coach Nick b-ball breakdown. Players love to give trite Clichés like "this game was the turning point of our season" or "we're really coming together now", but can you blame them? The more they stir the pot, the more fame and endorsements are theirs for the taking. You can't put the blame on just one sector; this is more a general human weakness to assess every waking minute as the indesputable sign of what's to come.

Ultimately, we're all still going to overreact to certain wins or career-nights (Remember Leandro Barbosa in the 4th quarter @ Miami?) That's part of the fun. However, if we choose to believe that the thousands of hours we've spent playing and watching sports (or doing anything, for that matter) have instilled us with any true understanding of the game, we must remember that only time can really tell, that players take hundreds of shots every season and going 5-5 or even 10-10 means very little within this context, that LeBron and Kobe are incredible basketball players despite a few off nights, that centers who play 82 games in 6 years have essentially nothing to do with whatever hype they garnered at age 17, and that completely writing off 22 year-olds who can do this because they've had multiple suspensions makes absolutely no sense if you still believe in Rondo. Like all of you, ESPECIALLY THE EXPERTS (look below), I will still make blatantly wrong predictions from time to time, but let's keep these issues in mind the next time we go on a losing streak, or a winning streak, or think that, despite how HILARIOUS it sounds, one twitter account's post is the absolute word of god. 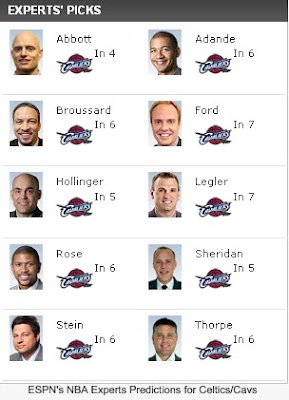