Bradley's return shows he is not the team's savior 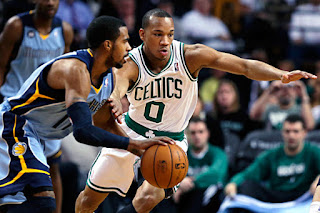 Avery Bradley made his return to the court Wednesday in the 93-83 loss to Memphis, and he brought a little reality with him.

The team did show some flashes of confidence with number zero back and had more fight in them than the previous few games, but one thing became clear as the game progressed: Avery Bradley is not the savior of the Celtics.

Granted, he only played 20 minutes and was quoted in an article on WEEI.com that his jumper was a bit off. But the problem was never going to be Bradley's play, it was everyone else's.

There was plenty of hype (this site included) about Bradley's return all season long. And while getting a player of Bradley's talent back is important to the team's success, it just goes to show that this team has more pressing problems to address.

As he gets more minutes, the team will show signs of improvement on the defensive end, as Bradley said in the article, "Defense is just effort." And he and Kevin Garnett certainly give enough effort. The hope would be that Bradley could take over as the defensive captain when KG hits the bench.

When he was on the court, Bradley did what everyone expected, played great on-ball defense and slashed to the basket when the opportunity arose. His jumper should improve, but that's just icing on the cake.

Now with Bradley back in the fold, Doc Rivers and Danny Ainge can stop waiting to see what kind of team they have and start making adjustments. Be that playing style, managing minutes differently, trades or whatever. Because even with Bradley, this team just isn't good enough.