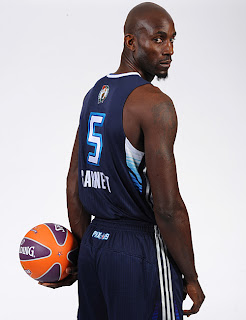 Rondo and Miami's Dwyane Wade are far and away the East frontrunners in the backcourt, while Garnett owns less than a 28,000 vote edge over Miami's Chris Bosh while on pace to start alongside LeBron James and Carmelo Anthony in the frontcourt.


Way to go Celtics fans! Rajon Rondo is going to get the starting vote, but Kevin Garnett and Bosh are look like they will go down to the wire. Hopefully the Celtics recent losing ways doesn't bring about apathy from some Celtics fans and Rondo is forced to start with three Heat players. Incredibly I saw a Celtics blogger today encouraging Celtics fans to vote for Bosh (don't worry he wasn't from this site). KG has proven once again this season how important he is to a team and what a great defender he is.

Keep voting for Rondo and KG Celtics fans. Would be a great treat to see two Celtics starting. And despite unfounded criticism towards Paul Pierce this year, I believe he deserves to be added to the team as well. The Celtics overall record might influence whether Pierce gets the nod or not. Hard to see C's getting three All-Stars if they continue to have a sub .500 record.